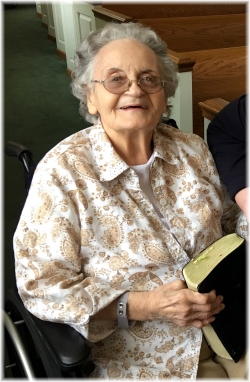 Elsie started her career as a teacher at a one room schoolhouse in Hay Springs, Neb. After getting married to her late husband Myron Cate, she later taught in a four room, eight-grade school in Vermont. The majority of her teaching career was spent as an elementary school teacher in Lamprey River Elementary School in Raymond, N.H., where she was awarded Teacher of the Year. Elsie developed the Readiness Program in Raymond, N.H., which was a precursor to the Special Education Programs.

On May 16, 1954, Myron and Elsie were married in Hay Springs, Neb., and shortly after they moved to Raymond, N.H. In 1961, the couple suffered a tragic loss when a flash fire destroyed their home in Raymond taking the lives of three of their five children. After the fire, Myron and Elsie moved to Vermont to farm for several years.

Upon returning to Raymond, the couple started Cates Rubbish Removal Corporation, which they owned for 43 years. They were the first rubbish hauler to institute recycling in New England in the 1950’s. They grew to be the largest independently owned rubbish company in New England, while Elsie was also teaching school full time.

In 1996, they sold the rubbish business in order to move back to Hay Springs, Neb., to allow Myron to pursue his lifelong dream of cattle ranching and farming.

Elsie and her late husband were active in the Raymond Baptist Church and later in New Hope Friends Church in Hay Springs, Neb., and recently Elsie was a member of Pleasant Grove Baptist Church in Louisville, Ky. Elsie accepted Jesus Christ as her Lord and Savior as a young girl and devoted her entire life to following Christ and telling others about Him. Even in her last week of life she was intensely desirous to tell everyone around her about Jesus. Her life’s verse was Matthew 6:33. “But seek ye first the Kingdom of God and His righteousness; and all these things shall be added unto you”.

Elsie was born on Nov. 13, 1932, in Hay Springs, Neb., to the late Ernest and Alzina (Gillette) Coleman. She was also preceded in death by her husband of 56 years, Myron Cate.

Memorial contributions may be made in the name of Elsie Cate through Newcomer Funeral Home, 235 Juneau Drive Louisville, KY 40243.

To leave a special message for the family, please visit www.Newcomerkentuckiana.com.