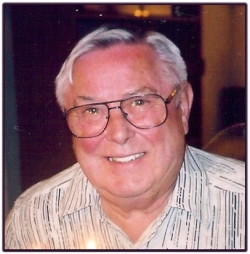 Gordon Moore Gealy was born Oct. 19, 1929, to Lester George and Mina Lucile (Moore) Gealy. He lived his early childhood on the homestead farm near Gordon with his parents, an older sister, Dr. Betty Foster and eventually a younger sister Mildred (Mildie) Esten, his grandparents Asa and Agnes Gealy, and the hired man. He was born in an era dominated by World War II and depression. He attended rural Mt. Pleasant School, the school of his father and eventually his children. He was an Eagle Scout and Boy Scout Leader. A special time was taking scouts to Philmont in New Mexico.

Gordon had many talents. He enjoyed hunting, fishing, golf, ping pong, music, woodworking, and swimming. He was a lifeguard and WSI teacher. He attended the University of Nebraska where he was enrolled in the school of music and agriculture. He married Carolyn Jeanne Waters in 1950. To this marriage came sons Stephen and Dr. Mark Gealy. He became a Mason and joined Eastern Star. He was Worshipful Master twice and a Shriner for a time. He attended Wooster College in Ohio and then back to UNL.

In 1957 he married Marda Jill Wagner. To this marriage came Marda Marie and Arden Moore Gealy. He received his Bachelor of Music in 1960 at Wichita University. His years as a music teacher gave him great pleasure as well as a ministry with youth. In 1963, he and his family returned to the family farm.

He lived in a hay baled house and taught in a country school. In that year he began the Sheridan County Rural Music Festival, which continued until the close of rural schools. Gordon liked to laughingly say that his claim to fame was singing for Tom and Nancy Osborne’s wedding. Gordon very much enjoyed young people and helped them through Senior High Fellowship at the Gordon Presbyterian Church, a church his grandfather built. Gordon served as an elder in the Presbyterian Church, and directed church choirs for 40 years in Lincoln, Gordon, Wichita and Kearney. The world of music provided longtime friendships and pleasure.

In 1967 & 68, he and his cousin, Robert Gealy built a family home on the home farm. In 1986 & 87, the family moved to Kearney where he again helped build a greenhouse, flower shop, and home. He loved the farm and greenhouse life. But his family was where his heart laid. He enjoyed traveling the United States, but his favorite spot was the Black Hills in South Dakota. He was always up for good and not so good jokes.

A Celebration of Life with Masonic Rites was held at First Presbyterian Church, Gordon at 11 a.m. on Sept. 11, 2017, with Rev. Patricia Stetson-Warning officiating. Cremation followed. Interment at Gordon Cemetery will be at a later date.

A memorial has been established for the First Presbyterian Church of the Gordon Masonic Lodge and donations may be sent in care of Chamberlain-Pier Funeral PO Box 366 Gordon, NE 69343.