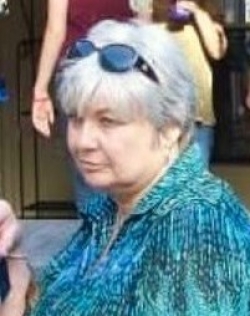 Camille “Jamison” Green was born on June 6, 1947, to Arthur and Martha (Bone) Jamison in the eastern Texas town of Mount Pleasant. Camille passed away on Sept. 7, 2017, at the Gordon Memorial Hospital. She was 70 years old at the time of her passing.

Camille grew up in the little town of Ore City, Texas. She attended public school and graduated from Ore City High School in 1965. After graduation, she attended Texas A&M University-Commerce for 3 years before starting to work at a publishing company in Mount Pleasant, Texas. In the late 60’s, she moved to Dallas and briefly worked as a receptionist at a construction company before going to work for the Army-Air Force Exchange Service in Dallas. Camille worked as an office manager for the Exchange Service until she retired after 20-years of service in the early 90’s. On Oct. 5, 1986, Camille was married to Richard “Rick” Green in Las Vegas, Nev.

If there was one particular love that Camille enjoyed throughout her life, it was reading. She loved books on history and had a real affinity for mystery novels. She actually taught her daughter Jennifer to read at the age of 3. In addition to her love for reading, she also loved World War II and old western movies. She was an excellent cook.

After Rick and Camille were married, she developed a great love for hunting, fishing and camping. She fell in love with the outdoors and especially loved living in the country where she could observe and enjoy the wildlife around her.

Camille loved her roles as Mother, Stepmother, Grandmother and Great-Grandmother. She and her daughter Jennifer were very close and would talk or text each other every day. She was a very caring and good-hearted person. Camille was a member of the Gordon United Methodist Church and the American Legion Auxiliary.

She leaves behind her husband Rick, her daughter Jennifer Davis and her husband Billy and Jennifer’s 2 daughters Camilla and Brianna Davis and one great-granddaughter Beatrix Boone. In addition, she is survived by two step-daughters; Kim South and Shelly Green and 2 step-grandsons; Logan St. Germain and Luke South. She also leaves behind her only sister Geri Brownlee. She is preceded in death by both of her parents.