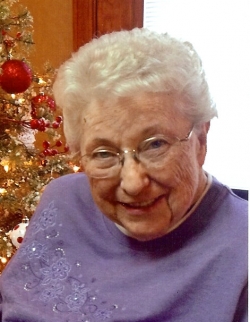 Louise was born on Oct. 8, 1932, in Gordon, Neb., to Walter and Maggie Goodin. She attended school at Pleasant Hill and Gordon High School until her sophomore year. She attended Curtis High School in Curtis and graduated in May of 1951. She later attended Cosmetology School in North Platte graduating in 1954.

She married Jim Ginkens of Mullen on Feb. 10, 1957, in Gordon, Neb. They made their home south of Whitman where four children were born, Cheryl Lynn, Wesley Leonard, Roger James and Edward Lee. In the summer of 1964, the family moved to the Goodin Ranch east of Gordon, Neb. Jim and Louise remained at the ranch until 1988 when they moved to Gordon. Jim passed away on Jan. 30, 2007.

Louise moved to the Lebensraum Assisted Living in Grand Island in June of 2011 where she met many new friends. She moved to the Good Samaritan Nursing Home in Wood River in August of 2015 due to the progression of Parkinson’s disease.

Louise and Jim bowled on a couple’s league for many years and had happy memories of time spent with their “bowling buddies”. She liked to crochet and made each one of her grandchildren an afghan with the colors they chose.

She was a member of the Pleasant Hill Extension Club and the Gordon United Methodist Church.

Services were held at 2 p.m. on Tuesday, Sept. 26, 2017, at the United Methodist Church in Gordon, Neb., with Pastor Marsha Stauss officiating. Burial was held in the Gordon Cemetery. Visitation was held on Monday, Sept. 25, 2017, from 5 p.m. to 7 p.m. at Chamberlain-Pier Funeral Home.

Memorials are suggested to the Sara French Ginkens Scholarship Fund in Mullen or the Gordon Volunteer Fire Department and donations may be sent in care of Chamberlain-Pier Funeral Home, PO Box 366 Gordon, NE 69343. Online condolences may be directed to www.chamberlainchapel.com.