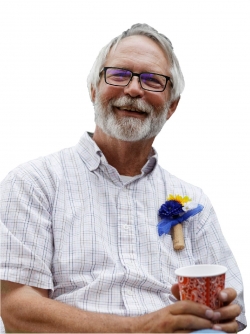 James Allen Dudek was born April 29, 1952, to Norman and Pauline (Brungardt) Dudek in Hastings, Neb.  He was the oldest of four children.  He studied to be a teacher with a minor in art and music at Hastings College.  In 1977, in Kearney, he met June Thorsen on the steps of the Church of God after an evening service.  They were married the next year and in 1979 they moved to Gordon and worked on the farm/ranch with her parents.  In the 1980s two children were welcomed into the family, Peter James and Sarah Joy.  Then in 2015, Jim and June moved to Hay Springs, Neb.

He and a friend were interested in learning more about computers so they studied at Chadron State College where he received his Master’s Degree.  When a position became available to teach in the computing field at Oglala Lakota College in South Dakota it was soon apparent he had a gift for teaching adults.  He relished the task of teaching Information Technology (IT) to the students – he especially enjoyed helping them to learn programing.  There were many times he would go somewhere and people would express how much they learned in his classes.  He taught there for 24 years.

Jim was a great man.  So kind, thoughtful, and considerate to others.  He had a peace that surpassed understanding, which came from his faith in Christ and His salvation.  He knew he could trust God to lead him and to work out troubles in life.

Besides studying his Bible, Jim really enjoyed playing the bass guitar with the worship team on Sunday mornings at the Gordon Church of God.  He really enjoyed the Bible study he and June attended in Hay Springs on Sunday nights.  In the past, he lead a number of Bible studies that people really appreciated.  He was a thinker and loved sharing deep insights with others.  When living in Kearney, he would preach at area churches when they needed someone to fill in.  For awhile he preached at the Chadron Church of God.  He was a Sunday School teacher for many ages over the years.

Jim was very involved in the Gordon community while living there.  From country school board member to helping to develop and establish the Gordon Farmers Market, serving in the Gordon Economic Development group, and Chamber of Commerce amongst other things,  he was also a very present help with the Dudek’s Christian Bookshelf even though he was not always there.

Some of the recent joys he had was being able to give his daughter away in marriage to a good man and being the grandfather to a very special little girl, Malorie Joe.  They were  very close, next to inseparable.