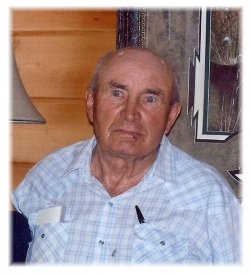 In memory of Mark Emmett Colwell who was born on January 6, 1929 to George Everett Colwell and Mary Margaret (Kearns) Colwell and passed on to heaven peacefully on November 14, 2017 at Gordon Countryside Care. He was the eldest of nine children where they were born and raised near Whiteclay, Nebraska into a life of farming and ranching. His siblings include Doris(Tallon), Floyd, Helen (Crist), Charles, James, Roy, Jerry and Kay (Ehrmann).

He graduated from Rushville High School in May 1947 where he first exhibited his love of sports, excelling in football and boxing. He worked in farming and ranching with his Dad and brothers for a number of years. He had to grow up at an early age because they lost their mother in a tragic accident when he was in his late teens.

Mark is survived by his wife Joan, daughters Nancy, Connie, and Laurice, grandkids and great-grandkids as listed above, and numerous nieces and nephews.  He was proceeded in death by his parents George and Mary, sisters Helen and Kay, and brother James.

He was a dedicated husband, father, grandfather and great grandfather. He was the hardest worker ever and never quit until the job was done. He lived a life of honesty and integrity and never knew a stranger. He always had a smile and never complained no matter what his suffering may have been.

He loved his wife beyond measure and never wanted to be apart for any length of time, their love for one another simply amazing.

He always ended the evening or a visit with loved ones saying “God Bless You” and “Sweet Dreams”. He spent his entire life in this Panhandle of Nebraska community which he loved dearly and touched far too many lives to count.

The family wishes to convey their deepest appreciation to the Rushville Volunteer Fire and Rescue Unit for the numerous trips to their home to assist in any way needed. We also wish to convey our deepest appreciation for the personal and loving care given to my husband, our Dad, and our grandfather at Gordon Countryside Care during the last year of his life before he was called to be with God.

The family wishes to establish a memorial to the Rushville Volunteer Fire and Rescue Unit. Donations may be sent in care of Chamberlain-Pier Funeral Home, PO Box 366 Gordon, NE 69343.