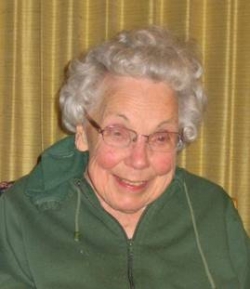 Ruth Louise Shifflett Gealy, 96, died Friday, Dec. 1, 2017, at Countryside Care in Gordon, Neb. She was born to Scott and Mary Shifflett in Earlham, Iowa, on Nov. 1, 1921. She graduated from Dexter, Iowa, High School in 1939, and attended college at Iowa State and Park College. During the war years, she took a hiatus from her studies at Iowa State to work in the Dexter, Iowa, bank after her father died in 1942. At the end of the war, Ruth resumed her studies at Park College, where she met Robert Gealy, who had gone there on the GI Bill. After she graduated from college they moved to Lincoln, Neb., where Robert continued his studies. They were married at Dexter, Iowa, in August of 1948, and after Robert graduated in 1949, they moved to Crawford, Neb. In 1952, they moved to the farm north of Gordon, where they raised their four children and farmed until Robert died in 1990. Ruth continued to live in her ‘House on Singing Hill’ until poor health forced her to move to Countryside Care in 2015.

Ruth was active at First Presbyterian Church, Music and Dramatic Club, PEO, Willow Tree Festival, and many other local and neighborhood organizations.  Her church work included Sunday school teacher and superintendent, youth leader, senior choir, organist, and church officer. She was a teacher at Mt. Pleasant and Mt. Hope schools for several years and she gave piano lessons to many children.  She was a highly talented writer who shared wisdom and recipes in her ‘Notes from a Singing Hill’ column that appeared in the Gordon Journal from 1968 to early 2013.

Ruth and Robert were avid travelers, and regularly visited “the kids,” who were spread more or less across the country. Over the years, they went to all 50 states. After Robert died, she continued to make family visits on her own.

Her dedication to the Church and ministry to fellow Christians were evidenced by the many Old Testament Musicals she wrote and directed over the years. She intended the musicals to be the modern-day equivalent of the Miracle and Mystery Plays of the Middle Ages that were used to tell stories of the Bible to ordinary people. Her musicals were performed at the First Presbyterian Church, Gordon City Auditorium, and Presbyterian Church in Kearney.

Ruth’s family would like to thank the nurses and staff at Countryside Care for the loving care they gave her during the last nearly 3 years of her life.  She had become quite comfortable there.