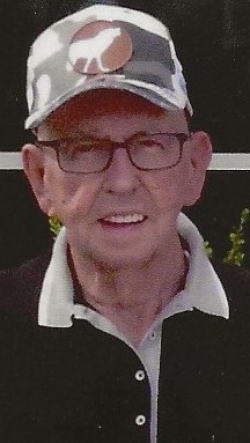 Merle was born on Aug. 12, 1922, in Gordon, Neb., to Susan (Sanders) and Charles Cutshall, and he passed away at his home in Wenatchee, Wash., on Nov. 5, 2017. His first job was helping the family as a ranch hand. He joined the Navy in 1943 and served in the South Pacific. During his time in the Navy, he was a boxing champion. After returning home from WWII, he married Leah Butterfield, in 1946. They had two children: Carolyn in 1947, and Gary in 1951. Merle owned a clothing store in Gordon and later, partnered with the local bakery. In 1957, he moved his family to East Wenatchee, Wash., “God’s Country, where the wind doesn’t blow.” We’ve had a lot of laughs about the quote over the years! He bought a home in East Wenatchee, and started working in construction on several dams. He then went on to purchase the Shell Service Station on 9th St., in East Wenatchee, a place where he taught his kids all about cars and how to maintain them. In 1963, he went to work for the PUD at Wells Dam; he then retired 20 years later, and moved to Coulee City, Wash., so he could be close to his favorite fishing hole.

There will be no service per Merle’s request, but in the spring, the family will have a Celebration of Life at Banks Lake to spread his ashes.