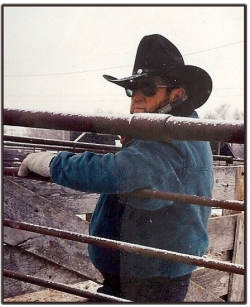 He grew up north of Rushville helping his parents farm, ranch, and milk cows, and enjoyed part of his summers in Hay Springs with his cousins and grandparents. He attended country school and graduated from Rushville High School in May 1965. After school he spent 6 years in the Army and Reserves.

J.B. married Carol L. Reed on June 16, 1973. They lived in Rushville for a short time before moving north of town to the family ranch. They had two children, Melissa in 1977 and J. Jason in 1980. He continued to ranch and even though it wasn’t his favorite thing he helped his dad farm. During his early married years and among farming and ranching over a span of 40 years he worked full and part time at the Rushville, Gordon and Crawford Sale Barns.

He enjoyed family camping trips, family reunions and fishing as much as he could. He was very proud of his military service and his grandchildren. He is dearly loved and is terribly missed.

He was preceded in death by his parents Jim and Marian and is survived by his loving wife Carol, his daughter Melissa, his son J. Jason, daughter-in-law Kristen and eight grandchildren; McKayla, Mitchell, Miles, Maggie, Augustus, Cutter, Eli and Kooper.

On line condolences may be left at www.chamberlainchapel.com