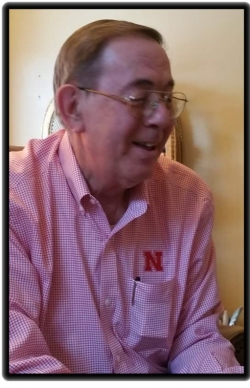 Dean LeRoy Strong, 68, of Gordon died Thursday, Jan. 4, 2018, at his home. He was born May 9, 1949 in Douglas, Wyoming to Rex and Olga Strong. He joined his older sister Diane, as the newest member of the family. Rex moved the family to Gordon, Nebraska two years later.

Even though he was born in Wyoming, Dean was a full-blooded Nebraskan for the rest of his life. He loved the Gordon Community; he loved the Nebraska Sandhills; he enjoyed hunting Nebraska’s small lakes, but most of all he loved the Nebraska Cornhuskers. The Big Red was his football team and he attended more than 50 games. He was a huge fan!

Rex drove a gas truck when Dean was young and he loved to go with his Dad and eat hot beef sandwiches at truck stops with the other truckers. He had a lifelong love of trucks.

Dean graduated in 1967 from Gordon High School. During high school Dean was very active in sports. He lettered in football and track and was a member of the G-Club.

Dean went on to college at the Rapid City School of Mines and Technology and after two years he became concerned that the Vietnam War might end before he got to go. He was a real patriot and wanted to serve as his Dad did in WWII. Consequently, he quit school and enlisted in the U.S. Army. He was in the Army from October 24, 1969 to January 29, 1972, and he reached the rank of Spec 5. Dean was sent to Vietnam and served with the 67th EVAC Hospital APO 96238 from March 25 to January 28, 1972. Dean was in a heavy combat zone in the jungles of Northern Vietnam for most of his time in the war. The U.S. Army used the defoliant Agent Orange to clear the jungle in this area. Little did Dean know that his contact with Agent Orange would ultimately cause the cancer, some 45 years later, which would end his life. Dean was a casualty of the Vietnam War and Agent Orange. Dean died for his country!

After his return from the service, Rex asked Dean to come to work at Strong Insurance. Dean did and he found that he really enjoyed the insurance business. Rex told him that honesty was the best policy and that is the way he wanted the business operated. He also believed success was attainable regardless of the odds and one must always give their very best effort to succeed. Dean learned this well. After a few years, Rex came to Dean and told him that he wanted Dean to eventually buy the business and they negotiated a contract to make that happen. Dean paid for the business over many years. Before Rex died in 1988 the contract had been fulfilled. As Rex before him, Dean became a pillar of the community and continued to build his business. He was successful and enjoyed giving back to the Gordon Community. He also continued to support his mother financially until she died in 2011. He was a Man’s Man.

In July, Dean finally asked Jacqueline (Jacque) to marry him. They were married on July 3, 1995, and the whole town was invited. Jacque was the love of his life. She had three daughters from an earlier marriage: Toni, Michelle, and Stacy. Dean’s family was now complete. He truly enjoyed married life, and he came to love Jacque’s daughters as his own. He was a happy man!