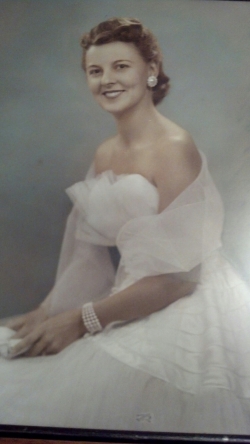 Ruth Elaine McGaughey was born the second child of five to Robert K. McGaughey and Jessie Faubel McGaughey, on Jan. 20, 1926, at the McGaughey farmstead, four miles north of Gordon, Neb. She attended the Presbyterian Church in Gordon her entire life. She attended grade school at the Mount Pleasant Country School, through the eighth grade, with her other sisters and brother. Transportation to the school was by horseback, with up to three children riding the same horse. One day she fell off the horse and hit her head breaking her left ear drum, even after surgery in later years, she lost a significant amount of hearing in that ear. She attended high school in Gordon, Neb., and graduated in 1943. The following year, she attended Barns Business School in Denver, Colo., and upon graduation, she lived with her Aunty Mary Faubel in Ogden, Utah, where Ruth worked as a secretary to military officers.

Her family’s childhood was rocked by tragedy in 1940, when Ruth was 14 years old, while her mother was lighting the kitchen cooking stove pilot light, it exploded, badly burning her mother. Unfortunately, Penicillin had not yet been discovered and a few months later, in Omaha, Neb., her mother passed away from Pneumonia. As fate would have it, tragedy struck again, a short time later, when Ruth’s father, Robert was going through the gate with a team of horses, the horses bolted, and the wagon wheel ran over his face. With multiple broken bones, he was not expected to live. The children feared they would be put up for adoption, but through a miracle of God he survived. To this day, the family has remained close knit, celebrating decades of holiday dinners, including the McGaughey tradition of Memorial Day picnics.

Ruth and Niel O. Nielsen were wed on Dec. 8, 1946, in Gordon, Neb., at the First Presbyterian Church, where she and Niel were lifelong members. Upon returning from their honeymoon, they lived at the Nielsen homestead, where, after the birth of their firstborn, Gary, there were 3 generations living in the house at the same time. To this marriage, they had four additional children, Vickie Herring, Greg Nielsen, Christina Velarde, and Jeanne Stamps.

In the fall of 1992, Niel suffered from a debilitating stroke. Ruth’s unconditional love and unending patience shone as she took care of him till his death on June 15, 1996. After his passing, she continued to reside at the farm house until February 2014, when, after a fall, she eventually moved into Countryside Care, in Gordon, Neb. There, she spent her final years, where the staff doted and loved on her.

If there was one word used by others to describe Ruth, it was the word “gracious”. Additionally, she had a sunny personality, was creative, an excellent writer and had a great sense of humor. Often, after telling a story, she followed it up with a cute giggle and maybe a sly wink. Ruth enjoyed her large flower garden and had the talent to create beautiful floral arrangements. She was also active in the Flower and Garden Club, Pinochle Club, and birthday coffees. Ruth was an active member of Eastern Star, where she was the Matron of Honor in 1964.

Her children remember her as a devoted and dedicated mother, who put her children’s needs and wants above her own. In preparation for 4-H livestock shows, she would stay up late at night ensuring that their clothing was clean and immaculately pressed, getting up early to prepare a hot breakfast, before the calves were loaded. With the assistance of Stella Andrews, Ruth became an accomplished seamstress, including creating pioneer outfits for Gordon’s 75th celebration. She passed her knowledge onto her daughters, where they learned the importance of small details, especially making sure “those seams match”.

When Ruth went to her Heavenly Home, she was greeted by her husband Niel, her sisters, Dorothy Nielsen and Mary Wersal, a brother Robert McGaughey, and one granddaughter, Shana Herring. She has left behind one sister, Janice Shuster, five children, twenty grandchildren, fifty-four great-grandchildren and two great-great grandchildren.

She will be missed by all that knew her.