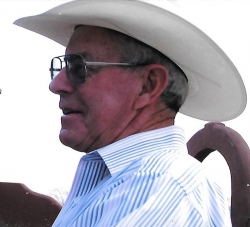 Ed was born April 24, 1929, at Alliance to Edward M. and Thelma (Zoble) Becker.  He subsequently became the big brother to Arlene Minor, Maxine Morris and Charlene Hebbert.  Three other sisters, Irene Lowe, Darlene Bonifield and Delores Valentine preceded him in death, as well as his parents and two brothers, who died as babies, and a baby grandson, Joseph Cawiezell.

Ed attended country school near their Ashby ranch and then attended St. Agnes Academy, where he played football and basketball before graduating in 1948.  Following graduation he joined his dad in ranching.

In 1983, after Dean and Nancy were well established at Lowe Cattle Company, Ed and Sally bought a place east of Chadron and he was able to rope more and they both began to enter Old Timers Rodeos all over the West.  In 1989, they went to Arizona for two weeks and in time bought their own place, rodeoed, made new friends and enjoyed the warm weather-but were always home by calving time just in case he was needed.

His family includes his wife, Sally, of 64 years; his daughters, Brenda Booth of Casper, Wyo., Joan (Bill) Bolln of Chadron, Nancy (Dean) Edelman, who live on and manage the family ranches in Ashby, Luanne (Chuck) Cawiezell of Lingle, Wyo., Julie Roland of Tyndall, S.D., and Kerry Becker and her partner Michelle Wright of Riverton, Wyo.  He was always so proud of all his girls because as he told people, “They all know how to work.”

They also raised grandchildren and great-grandchildren whom he enjoyed as well: Cory and Mark Brennan and their children, Collin and Rylee;  Kelli and Jack Rhembrandt and three boys, Tameron and Dillan Sayaloune and Blake Rhembrandt; Traci and Butch Hollibaugh and  daughter Laney Klemke; Dean and Ann Lehmkuhler and their girls Eva and Abby, Lander, Wyo.;  Andrew Roland, USMC, Indian Head, MD;  Jill and Trevor Eppert and TC;  Jake Edelman, Ashby.

In lieu of flowers, memorials may be given to the Grant County Rescue or the Shriner’s Hospital for Children, Attn: Office of Development, 2900 N. Rocky Point Drive, Tampa FL, 33607.

Bates-Gould Funeral Home is in charge of the arrangements.