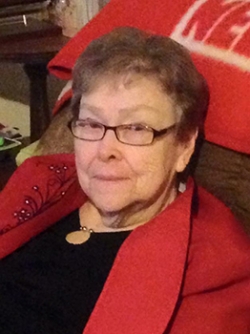 Shirley Evelyn Gardiner Whitney was born to L. Jay and Evelyn B. Gardiner on June 8, 1933, where the family lived on a ranch north of Merriman, Neb. At a young age, the family moved to Red Deer Ranch, south of Valentine, where she loved being outside with her dad and loved riding her paint horse, pretending she was Gene Autry. She loved country living and being outside.

In 1947, the family relocated to Gordon, Neb., where Shirley attended and graduated from Gordon High School in 1951. In Gordon, she was a majorette for the Gordon Broncos and worked at the local theater as an usher where she got to watch her favorite cowboy movies.

She attended college at Chadron State and rode the train to and from school to get home, because she was homesick. Shirley received her teaching certificate from Chadron and started teaching school outside of Hay Springs where she met and married the love of her life, David Whitney. David and Shirley were married at the Methodist Church in Gordon on Dec. 27, 1953. They moved to the Whitney farm, south of Hay Springs, where they lived in a spacious ‘open concept’ one room home. There Dave farmed and Shirley taught school on the Flats.

Dave and Shirley had six children. Four were born while on the farm. She took much pride in the fact all of her children were potty trained before they turned one. In her spare time, she helped on the farm and sold Avon and Fuller Brush items. After the family moved from Hay Springs, two more children were born. She was a strict disciplinarian, but having six children just seven years apart, she needed to be. She was a fun mom and her children loved spending time with her. She always made each one feel special.

Shirley had several jobs throughout her life as the family moved quite a bit. She worked as a PBX Operator for the hospital in Hastings and also worked at the utility office. She spent several years as a cashier and loved dealing with the public. She took pride in her work and performed each job with excellence, which is a trait she instilled in all of her children.

Shirley was an excellent seamstress and enjoyed quilting and crafting. She had many friends and enjoyed socializing and spending time with her family. One of her greatest joys was being a grandma and great-grandma.

Shirley passed away at her home in Valentine, Neb., on January 21, 2018. She was a good friend to all, including her children, and will be greatly missed.

She was preceded in death by her parents; Dave, her husband of 54 years; two sons: F Scott and Ben Jay; a grandson Davy Louder; brother Wallace Gardiner; and two brothers-in-law: James Cozad and Richard Haslow.

A memorial service will be held at 1:30 p.m., Friday, February 2, 2018, at the Berean Bible Church in Valentine. Inurnment will take place following the Gardiner Family Reunion at 1 p.m. Sunday, July 15, 2018, at the Hay Springs Cemetery. In lieu of flowers, memorials may be made to The Berean Church building fund and sent to the family at 28350 198th Street, Pierre, S.D., 57501. Holmes Funeral Home of Valentine has been entrusted with the arrangements.