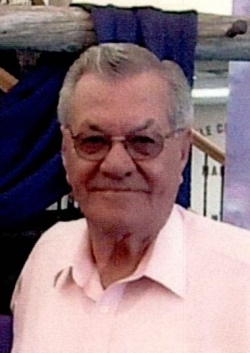 Nick D. Dahlgren, 85, of Scottsbluff, Neb., went home to be with his Lord Jesus on February 11, 2018, at Skyview Care Center, Bridgeport, Neb. A celebration of life was held at 11 a.m. on Monday, February 19, 2018, at Mitchell Berean Church with Pastor Giles Armstrong officiating. A private family burial will be held at Fairview Cemetery. Donations are suggested to the Mitchell Berean Church or to the family to help cover Nick’s medical expenses. Online condolences may be left at www.dugankramer.com.

Nick was born May 6, 1932, in Merriman, Neb., to Cecil A. and Vera T. (Sellers) Dahlgren. He attended school in rural Cherry County and moved with his family to Gordon, Neb., when he was eleven years old and graduated in 1950 from Gordon High School. In 1950, he joined the United States Navy during the Korean War. Nick became a Radio Man, Second Class aboard the U.S.S. Foss and the U.S.S. Brown. He was honorably discharged in 1954. He married Yvonne Thompson in 1955 and from this union three children were born: Rex, Rona, and Rick.

In 1988, he met and married Judy (Loose) Lienemann and was blessed to have her three children, Debbie, Kim, and John in his life. He worked for the State of Nebraska for 30 years as a Grain Warehouse Examiner, and retired in 1992. During retirement, he worked for Co-op Pharmacy delivering prescriptions, and the last ten years was a delivery driver for Team Toyota.

Although Nick grew up in ranching country, where horses were numerous, he would rather ride something with wheels and a motor including the many motorcycles he had. Nick was the first charter member in the NE Motorcycle Retreads in Culbertson, Neb. Nick and Judy loved to travel visiting many sites, places, and family in the United States. They both loved the Huskers and attended many football games including two bowl games. Nick loved the Lord, his church, and people. He will be missed.

The family would like to thank Regional West Hospice, Skyview Nursing Home, the VA, Carole Sinner, Mandy Fertig, and all the prayer warriors.