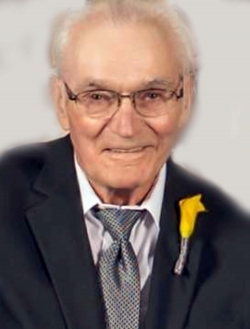 Don was born on Sept. 30, 1931, on the family farm west of Ord as the only child to Victor and Emma (Lukesh) Benben.  He grew up in rural Valley County and attended Davis Creek and other rural Valley County schools, North Loup Public Schools, and Ord Public Schools.  Except for his years in the military, he spent his entire life in Valley County.  He had been a resident for the past year of the Valley View Senior Village in Ord due to the progressive effects of Parkinson’s disease.

Don enlisted in the Air Force on Feb. 26, 1952, and was stationed in Amarillo and San Antonio, Texas and Selma, Ala.  He was discharged in February 1956.

He was united in marriage to Theresa Ann McCall on June 22, 1952, in Amarillo, Texas.  Except for the years when Don was in the service, their entire married life was spent on farms surrounding North Loup, until 1986 when they moved into town.  Don had a love for farming and spent many years milking cows and raising hogs.  When they moved south of North Loup, Don farmed and worked for Max Klingensmith.  He then worked for the City of Ord at the Light and Power Plant for 38 years before retiring from there.

Don loved to read and enjoyed Johnny Cash music, John Wayne movies, anything chocolate, and playing cards.  Many pitch games were played over the years at family holiday dinners and gatherings and on New Year’s Eve with a group of life-long friends.

Don was preceded in death by his parents and an infant grandson, Jason Wegner.