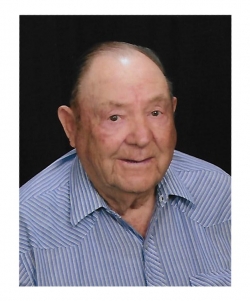 Bud was born June 29, 1926, to Asa and Julia Steele Hicks in a sod house northeast of Martin.  As a young boy, he lived in the Patricia area as his parents operated the store and farmed.  When his parents sold the Patricia store, they moved to Martin where they purchased a creamery.  They eventually purchased the home place where Bud lived until his death.  During his youth, he participated in 4-H and was involved with the family horse business providing bucking horses for area rodeos.  He attended schools in Bennett County and graduated from high school in 1945.  He enlisted in the Army in 1950 and served on the front line combat zone during the Korean War.  Bud served as a past Post #240 Commander, was Post Legionnaire of the Year in 1970, and District Legionnaire of the Year in 1972.  He also served on the ASCS board and the school board. He enjoyed watching sports, rodeos, and western movies.

He married Lynna Cummings July 19, 1957, in Rapid City, SD.  To this union, three children were born:  Lee, Leona, and Lyle.  They lived on the home place farming and ranching their entire marriage.  Lynna passed away February 4, 2000.