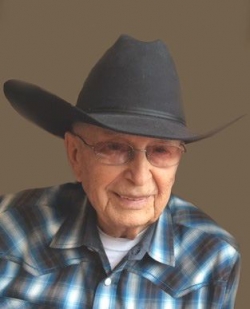 Robert “Bob” was born May 27, 1924, the youngest child of Arthur and Edna (Lange) Johnson who ranched near Rapid City.

Bob always wanted to be a cowboy and later on a cowman. He served a six-year tour in the US Navy Air Corp. Bob and his wife Bette have been ranching in the Rockyford area since 1953. Clay, their son and his family have been partners in the ranch for many years.

Bob’s history with ranching started when he caught a heifer calf at a Calf Catching Contest at the Deadwood Rodeo when he was 14. Bob was raised on a farm-ranch 10 miles northeast of Rapid City. He attended eight years at a country school 4-1/2 miles from home. He graduated from Central High School in Rapid City, and attended South Dakota School of Mines & Technology. Then World War II came along and he joined the Navy Flight Program. After he received his Wings, he was stationed at Naval Air Station Whidbey Island, WA, where he met the love of this life, Bette Frostad. They were married on Feb. 20, 1948.

After fulfilling his call of serving our country he was ready to pursue his lifelong goal and in 1949, brought Bette back to cow country and settled on the ranch. Bob and Bette were 4-H leaders for many years. Bob had also been a Shannon County Extension Board Member, a Shannon County Commissioner and Secretary for the Oglala Sioux Livestock and Landowners Association. He was also a member of the South Dakota Beef Industry Council for seven years as well as a Director of the First National Bank of Gordon since 1998.

One of the roles he was most passionate about was serving as Director and President of the South Dakota Stockgrowers Association. He was proud of the organization always standing for the grass roots rancher.

Bob was dearly loved and will be missed but we know we will see him again in God’s green pastures. He is survived by his wife of 70 years, Bette; his son, Clay (Nicole) Johnson of Porcupine; daughter, Chris (Billy) Hutchinson of White River; daughter, Kathleen (Bill) Timberman of Rapid City; grandchildren, Benjamin Johnson, Porcupine, Carly Johnson, Denver, CO, Kacy (Matt) Gill, Pierre, and Clay Hutchinson & great-grandson, Jace Hutchinson, both of White River; numerous nieces and nephews; as well as many wonderful cousins.

Previously passed are his parents Arthur and Edna Johnson and his sister, Georgiana Steinbach.

Funeral Services will be at 1 p.m. on Wednesday, March 14, at Osheim & Schmidt Funeral Home, 2700 Jackson Blvd., Rapid City. Burial, with military honors, will be at the Black Hills National Cemetery near Sturgis.