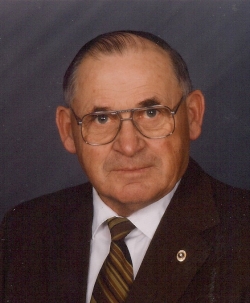 Gunnar Riis of Rushville, Neb., passed away March 31, 2018, at the Gordon Memorial Hospital in Gordon, Neb. Gunnar was born May 30, 1923, in Hasle, Denmark, to parents Emile and Albine Stenberg Riis. His schooling was through the seventh grade. Gunnar went to work on his dad’s and other farms, becoming a farmer.

After coming to the United States in June of 1947, it was here that he went to work for a brother, and later attended a specialty school for six months to learn the English language and other things about the U.S.

On Nov. 15, 1948, Gunnar was sworn into the US Army, taking basic training at Camp Funston, Kan. From there, he went to a Non-Commissioned Officers School, where he helped train new recruits. While in Kansas he married Lottie Grass. She passed away while he was on tour in Korea.

Gunnar was sent to Fort Lawton, Wash., and on Dec. 31, 1949, he loaded out for Korea. He spent eleven months in Korea and then advanced to a Sergeant 1st Class Commission. He transferred to the National Guard in Alliance, Neb., where he served for 9 years.

In 1956, he went to Denmark for about three months and visited family, including four sisters and one brother. While there, Gunnar bought a tractor for his dad. His dad liked the tractor, so the horses were sold.

When Gunnar returned to the U.S. and to Alliance, he was a mechanic for Alliance Tractor and Implement. Later he leased a shop in Rushville from Herb Wellnitz and eventually opened his own business of Case tractors and farm machinery. While in Rushville, Gunnar’s partner was Clyde Trenkle. After Trenkle retired and the business was dissolved, Trenkle passed away. After Trenkle’s death, his widow Betty and Gunnar were married in September of 1980.

Gunnar continued volunteering and serving his country in the American Legion, where he became Nebraska’s State Commander for 1982-1983. In 1990, he became a liaison to the Hot Springs Veterans Administration and the Nebraska American Legion Club. He continued his patriotism by volunteering with numerous organizations through his church, United Blood Services and the Rotary Club. He also became a member of the Retired and Senior Volunteer Program of Sheridan County. In 2000, he assumed full responsibility as the Sheridan County Historical Museum curator, located in Rushville, where he has provided over 4,000 volunteer hours toward the museum visitors.

After Gunnar retired and when his health permitted he was always willing to help his fellow friends. Gunnar was recognized for his years of community service at the Nebraska 2010 Governors Conference in volunteerism. This honor was truly placed on an American citizen. We all feel proud of him and his service.

Gunnar was preceded in death by his parents, three sisters and two brothers.

A memorial has been established for the Rushville American Legion, the Rushville Volunteer Fire Department or for the Morse Memorial Methodist Church and donations may be sent in care of Chamberlain-Pier Funeral Home, PO Box 366 Gordon, NE 69343.