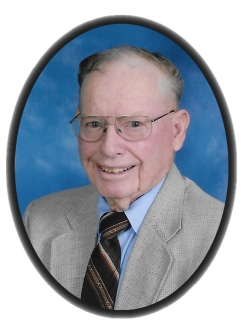 Born July 18, 1931, in Scottsbluff, Neb., to Harold and Audrey Hood, Kenneth lived a majority of his life in Nebraska with the exception of his military service stationed at Fort Hood, Texas, during the Korean Conflict.

On June 19, 1955, Kenneth married Donna Myers at St. Paul’s Lutheran Church in Rushville. The couple lived in rural Alliance, Neb., for 15 years prior to moving to Rushville in November of 1969.

A lifetime farmer, Kenneth was a long-time member of the Highway 20 Tractor Club and held a position on the Farmer’s Co-op Board of Directors. Aside from his love of agriculture, Kenneth volunteered in a number of roles at St. Paul’s Lutheran Church in Rushville and served on the church board. Many may remember his time serving as a school board member while his three children were attending school in Clinton District 26.

Later in life, Kenneth found joy in restoring antique tractors to give them new life and quickly became a lifelong passion around the Rushville farm.

He was preceded in death by his father Harold Hood, mother Audrey Hood, and brother Jerry Hood.

The family suggests memorials be made to St. Paul’s Lutheran Church in Rushville or the Rushville Rescue Unit and donations may be sent in care of Chamberlain-Pier Funeral Home, PO Box 366 Gordon, NE 69343.