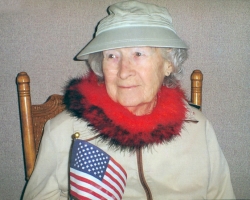 Katherine was born on Oct. 3, 1923, in La Junta, Colo., to George and Katherine Margaret Schott. Her father died in August 1930 and after her mother passed away in November 1936, Katherine went to live with her oldest sister, Mary Heinzman, until she graduated from La Junta High School in 1941.

On the 20th day of September 1942, she married Horace Hassan, Jr. Horace was inducted into the army on May 27, 1943. Katherine worked for Montgomery Wards from 1942 to 1947. Horace and Katherine moved to Albuquerque, N.M., and she went to work as an internal auditor for Cook Sporting Good until she retired in 1977. After Horace passed away, Katherine moved to Gordon, Neb., to live with her nephew Bob Schott. In September of 2011, she moved to Parkview Lodge Assisted Living in Rushville, Neb.

French Mortuary of Albuquerque, N.M., and Chamberlain-Pier Funeral Home of Gordon, Neb., were in charge of arrangements.