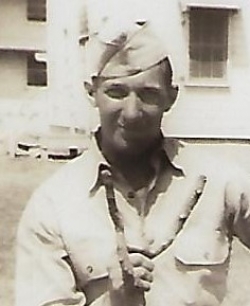 John was born on February 14, 1923 in Rushville, Nebraska to Hans and Evangiline (Aubert) Fankhauser.  He graduated with the class of 1940 from Clinton, Ne.  John farmed around the Rushville area and in 1944 he joined the United States Army Air Corps and was in radio and communications during WWII, stationed in India.  After WWII he returned to Rushville where he later married Bonnie Belle Grein on September 5, 1950.  To this union was born four children.  John attended Milford Trade School for autobody and fender repair.  The couple moved to North Platte where John worked at Al Eighmy’s and Brinks Dodge.

After retirement John enjoyed working outside, whether on his yard, in his garden, or helping his neighbors.  He was a member of the American Legion.

He was preceded in death by his parents; wife; sisters, Helen, Ruth, Irene, Violet, Opal (Bernard), Bette (Raymond), and Loraine; and a brother, Arthur “Bud” Fankhauser.

Memorials are suggested to the American Legion or to the Cystic Fibrosis Foundation.  Online condolences may be shared at www.adamsswanson.com.

Memorial services will be 2:00 p.m. Friday, August 31, 2018 at Adams & Swanson Funeral Home with Pastor Brent Montgomery officiating.  Burial will follow at Fort McPherson National Cemetery near Maxwell with military honors graveside.  Cremation was chosen, those wishing to sign the register book may do so 9:00 a.m. – 5:00 p.m. Thursday at Adams & Swanson Funeral Home which is in charge of arrangements.