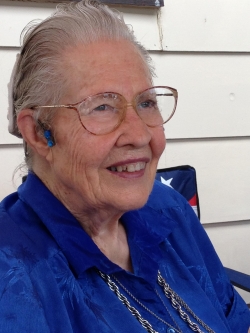 A celebration of Life for June Frances (Bell) Vahrenkamp, age 90, will be 10:00 AM, Friday, September 7, 2018 at the Chadron Berean Church, 407 Shelton Street with Pastor Dan Williams of Crete, NE officiating.

June went to be with her Lord and Savior September 3, 2018 while residing at Pioneer Manor in Hay Springs, NE. She was born February 8, 1928 to Ona Mae (Ready) and Clifford Alsbrook Bell in Walsenburg,CO. June was the oldest of three children, including Raymond and Renee, and lived at Texas Creek, CO where her father managed the railroad station. When June was 18, her mother died from leukemia.

During high school at Salida, CO she met her sweetheart, Jim. Following high school June worked as a telephone operator for one year. On July 9, 1946 she married Jim Vahrenkamp at a friend’s home near Howard, CO. The newly married couple moved to a log home north of Hay Springs, NE where Jim worked for his brother-in-law, Elmer (Bud) and Hermie Cilek. Six years later Jim and June moved to a farm south of Hay Springs where they raised four children: James Michael, Jeffrey Marc, Jamie Maureen and Jackie Marie.

In 1978 June and Jim moved south of Valentine, NE where June enjoyed gardening and bird watching at the ranch. June is remembered for her crocheted snowflakes included in every Christmas card she mailed. She was involved as a 4-H leader for more than 25 years and a United Methodist Sunday School superintendent.

June and Jim retired to Chadron, NE where she enjoyed her family, church and Bible study groups.

Chamberlain/Drabbles Chapel of Chadron, NE is in charge of arrangements. Memorial donations can be made to The Gideons International, Chadron Gideon Camp, POB 1244, Chadron, NE 69337.