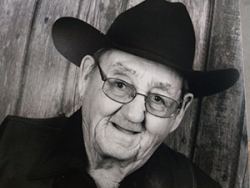 Eugene “Tubb” Fish was born on May 27, 1939, and spent his youth around the Gordon, Neb. area. As Tubb entered high school, he was engaged with sports, rodeo and working alongside his Uncle Nelson Fish on the Star ranch. While on the ranches he learned how to train and care for horses and horse teams. He graduated from high school in Gordon, Neb. He explored going to the University of Nebraska to play football, but decided that he was not meant to be a football player. He then spent a short time with his brother learning about and riding race horses. The sandhills were important to Tubb, and he came back to the Gordon, Neb. area to return to the ranch and rodeo as a bronc rider and calf roper.

Tubb married Georgiennne Cottier on November 25, 1961. They lived near Lakeside, Neb., and later moved to the Merriman, Neb.area. During their marriage, Tubb worked for several area ranchers and continued to perfect his craft of horsemanship. Eugene and Georgienne had two children, Faron and Mark, which they raised with them on the ranches. Tubb often shared his knowledge of horsemanship and caring for animals on the ranch with his sons. Tubb would provide opportunities and support his boys in their activities such as rodeo. The family spent many family hours traveling to area rodeos and Tubb would watch and support his sons in these events.

Tubb also enjoyed spending time creating and fixing equipment out of necessity and to explore his talents. He was remembered as a talented “tinkerer” and could make something out of nothing. Later in life he often enjoyed fishing, camping and tinkering.