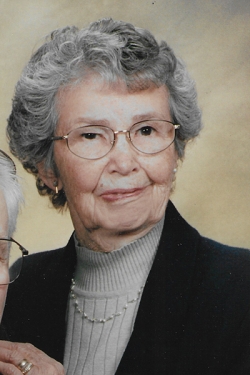 Eileen Elma Lang was born in Racine, Wisconsin on August 9, 1923, to Herbert and Elma (Hermansen) Lang. An older brother Clifford and younger brother Kenneth completed the Lang Family. Eileen grew up in the “Danish” part of Racine and as a bright girl, graduated from high school a year earlier than the rest of her class. She then continued her education at Grand View College in Des Moines, Iowa.

In 1942, Eileen’s folks moved out west to Hay Springs to be close to Elma’s family who had moved to the Danish colony on Mirage Flats. Eileen’s father, Herbert, took over management of the Hay Springs Cooperative Creamery. Eileen worked as a secretary for Roberts Dairy in Omaha and Lincoln and then came up to the Hay Springs Creamery.

During visits to her cousins on Mirage Flats, Eileen met a young man named Harmon Smith. Harmon joined the Air Force in 1944 and served in Okinawa, Japan. When he returned to the Mirage Flats farm in 1947, he married Eileen Lang on June 11. Harmon and Eileen continued to live on the farm for 44 years raising three children, Bridget Ellen born during the blizzard of 1949, Sydney Anne 1951, and Carl Harmon, 1958.

Eileen graduated from Chadron State College with degree in Library Science and took a position as Librarian for the Hay Springs School System in 1968, where she worked until she retired. Eileen loved to travel, spending the summer of 1971 studying in Denmark and Norway. Harmon and Eileen made over 30 trips around the US and around the world. Eileen was very socially active with the St. Peters Ladies Aid, P.E.O., the Westerner’s and C.C. Club. She was proud of her heritage continuing many of the Danish traditions.

Harmon and Eileen retired and moved to Chadron Nebraska in 1991. They moved to Prairie Pine Lodge in 2005, then to Pioneer Manor in Hay Springs in 2013. Harmon passed away on April 30, 2014, at age 93. Harmon and Eileen were married for 67 years and Eileen continued to miss him until her death on September 29, 2018.