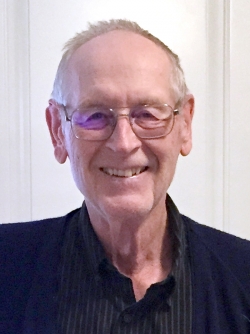 Robert Roy Stout, age 71, passed away in Vermillion, South Dakota on October 8, 2018, after a long battle with Lewy Body dementia. He was surrounded by his loving family.

Robert (Bob) was born in Oakland, California November 28, 1946, to Walter and Nora Stout. Bob graduated from Rushville High School in 1965, followed by receipt of a Baccalaureate degree from Chadron State College. Bob thereafter enlisted in the U.S. Army, serving in Germany as a meteorologist during Vietnam. After his Army service, he obtained a Master’s degree in Physics from the University of Tucson, Arizona. While in Tucson, he met the love of his life, Rita, and they were united in marriage March 16, 1974. After marriage, Bob worked for the U.S. Food and Drug Administration as a nuclear physicist in Boston, Massachusetts until returning to take over the family farm near Whiteclay, Nebraska in 1984. Bob and Rita welcomed two daughters, born in 1978 and 1980.

An avid reader and critical thinker, Bob was a rare combination of both scientist and farmer. He was realistic, relentlessly organized, and practical, while remaining moral and honest. His wit and unique sense of humor will be greatly missed. He was a loving father and husband. He instilled in his daughters the importance of family, education, and his hard work ethic.

Bob was preceded in death by his mother and father, Walter and Nora Stout.

Bob is survived by his wife of 44 years, Rita Stout (Bragg); his brother, Walt Stout; daughter, Jessica Freeling (Stout) and her husband Steve Freeling and their sons Grant and Mason; daughter, Carrie Stout and her daughter Quinn.

A service in celebration of Bob’s life will be held at the Extension Community Chapel in rural Whiteclay, Nebraska at 11:00 a.m. on November 3, 2018. Interment of ashes will be in the Extension Cemetery. Please join us for lunch and fellowship following interment. In light of Bob’s practical nature, in lieu of flowers, please send donations to the Rushville Volunteer Fire Department.