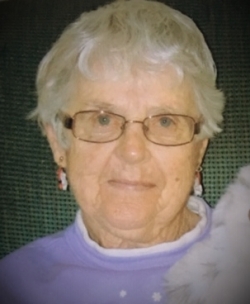 Aldean was the daughter of Charley and Elsie Letcher, the second of seven children. Her childhood was spent at the family farm and she received her elementary education at a rural school near her home. She attended Hay Springs High School.

On August 6, 1949, Aldean married Robert (Bob) Hunter. They began their life together on a homesite of her Father’s, on the Niobrara River. A son, Gregory, was born during this time. The young family then moved to a ranch north of Manderson, S.D. Sons Kenneth and Roger joined the family.

Aldean was a real cowgirl with a very strong work ethic of which she reminded her sons the importance of each day. She was a hard-working ranching partner with Bob, continuing to grow the ranch. They excelled in herd genetics and raising quarter horses. Life in the Sand Hills of Nebraska, as it turned out, was a great place to raise a family. It was Aldean’s home for many years.

Later in life, Aldean enjoyed belonging to a bowling league, riding her 4- wheeler, and making occasional trips back to the ranch. She looked forward to spending every Sunday with her siblings, playing poker. Significant bets were wagered--as much as 50 cents!

Aldean was preceded in death by her parents; her son, Kenneth Hunter; grandson, Eric Hunter; and sister Marilyn Lawrence.

A family memorial service was held at 10:00 a.m. on Saturday, December 8th, at Chamberlain Chapel in Chadron, Neb. Burial of her ashes will take place at a later time at the Sacred Heart Cemetery on Mirage Flats.

In lieu of flowers, a memorial has been established for Pioneer Manor Nursing Home in Hay Springs and the Senior Center in Rushville.