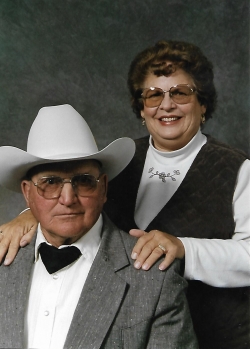 Clifford Curtis Andre was born on 11-3-1929 near Tryon Nebraska to George and Iva (Cassen) Andre. Cliff left home at the age of 16, hopping a train at Thedford Nebraska, ending up in Montana riding roundup wagons. After a few years Cliff returned to Mc Pherson County Nebraska where he later met and married Elyene Cumpston in 1951. Cliff worked for several ranches in Cherry County and surrounding areas with Elyene by his side cooking for hands on each of these places. To this union four children were born Norene, Roger, John, and Caleta Ann.

Cliff served his community as a 4-H leader, Sunday school teacher, AWANA leader, and was a member of the Gordon Valley Roping Club. Cliff and Elyene enjoyed attending and fellowshipping with their local churches and held many Bible Studies in their home over the years.

After the death of his wife Elyene, Cliff moved to Morrison, Colorado where he married Claire Wise and worked at Bear Creek Stable and Broken Spoke Wagon giving trail and wagon rides around the Denver Area. Cliff also enjoyed work at the National Western Stock Show each year.

Cliff went home to meet his Lord and Savior Jesus Christ on January 11, 2019 at Littleton Adventist Hospital in Littleton, Colorado.

Interment will be at a later date at High Butte Cemetary Mc Grew, Nebraska