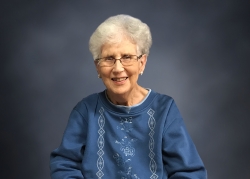 Kathryn Ann Johnson, 83, of Gordon, passed away Tuesday, January 29, 2019, at Gordon Countryside Care.    She was born June 3, 1935, on the Olds family farmstead northwest of Gordon, Nebraska.  She was the only child of Lester I. and Verna S. (Johnson) Olds. Kathryn attended Lone Pine rural school near her home through the 8th grade, along with farmstead cousins, Marilyn and Carmen Olds.  She boarded in town with the Bill Davis family during her freshman year. Then her parents moved to Gordon.    Her early employment included waitressing for Red and Thelma Holst, clerking at the Dime Store, and the Gambles Store.  She then worked for Purdy’s Studio.   Kathryn graduated from Gordon High School in 1952.  Kathryn was wedded to Deen E. Johnson on Dec. 19, 1954, on Deen’s leave from his Army service in Germany.  When Deen completed his tour of duty, the couple made their home on the Charlie Turnbull farm. During this time Janice and Rodney were added to the family.  They later rented the Charlie Hix farm. Russell was born there.     The family moved near Batesland, SD on a Goranson place, to farm the Jacoby land.  Upon the death of Deen’s father, Julius Johnson, they returned to Deen’s home place, in the Pleasant Hill Community.  Valarie was born into the family here.    Kathryn was a gifted homemaker.   Her specialty was creating scrapbooks and albums of her family and community. She loved to have her grandchildren and great-grandchildren visit, and inspired their interests in cooking, baking, gardening, canning, crafting, photography, sewing and crocheting. She was a dedicated 4-H leader and parent. She was a volunteer in the Sheridan County R.S.V.P organization.     Kathryn was a long-time member of Gordon United Methodist Church, where she served as a Sunday school teacher, Ladies Circle leader, vacation Bible school teacher, and funeral committee member.  Kathryn served in several offices in the Pleasant Hill Extension Club and wrote the community news articles for the Gordon Journal, and Sheridan County Star for many years.     It was Kathryn and Deen’s special hobby to travel together.  They enjoyed Co-op Elevator board trips to Mexico and the Bahamas.  They traveled on Security Gold Mystery trips, and some John Deere trips.  Some of their private trips included traveling with Bill and Kathy Combs, Jerry and Joyce Godfrey, Dale and Karen Lee, and Dave and Dorothy Browder.  They enjoyed camping, fishing, dancing and square dancing with their children and family.    Kathryn was a great hostess.  She always had the kettle ready to put on.  She was a good neighbor and known for her kindness to everyone.  She felt very blessed to have “inherited” four sisters-in-law who treated her as a sister.     Kathryn was preceded in death by her parents, Lester and Verna Olds;  in-laws Julius and Myrtle Johnson; great-grandson Bridger Krebs; son-in-law Casey Nelson; brothers-in-law William Bruns and Donald Boettcher.    She is survived by her husband Deen, her children: Janice Nelson of Winnetoon, NE,  Rodney and Donna Johnson, Russell and Lisa Johnson of Gordon, Valarie and Nathan Geisert of Ogallala, NE;  grandchildren: Walter Nelson, Delacia Hartman, Kathryn Kaufman, Deen Leroy Johnson, Krystal Freeseman, Kaleigh Krebs, Kohl Johnson, Kyle Rolf, Jakeb, Jordan, and Jensen Geisert, nineteen great-grandchildren, a host of nieces, nephews, relatives, and friends.    Funeral services were held Monday, February 4, 2019 at 10:00 am, at the United Methodist Church in Gordon with the Pastor Marsha Stauss and Pastor Bill Combs officiating.  Interment was in the Gordon Cemetery.     A memorial has been established for the Gordon United Methodist Church.  Funeral arrangements were under the direction of Chamberlain Pier Funeral Home.