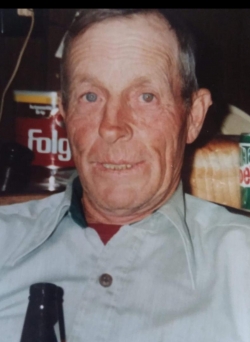 George Brownlow, known to family and friends as “Porge” passed away on February 10, 2019, in Chadron, Nebraska at the age of 83 years old. George Raymond Brownlow was born on March 7, 1935, to Ray and Ruth Brownlow in Rushville, Nebraska. He attended Cravin Creek School and graduated from the eighth grade.

George had numerous jobs, one leading to Galveston, Texas for a painting contract. Vernon Sager, his special life long friend said, “You are not going to like being far away from home.” Needless to say he was right, because he later came back to work for Vernon, his life long friend, and began a lifelong ranching career.

After retiring, George moved to Hay Springs to his mom and dad’s house where he enjoyed hunting, fishing, and was known to have a few beverages with family and friends, or whomever decided to stop by and talk of old times. If he was teasing or pulling a joke or prank on someone, he was happy.

George was married to Ardyth Rose, and to this union three children were born. Sons, Jimmy Ray and Robert Neal Brownlow, and daughter Joanne Marcene Lintt. He then married Clarenda Lee Broken Leg and to this union two sons were born, Neal Allen and Gayle Lee Brownlow. George was then married to Sharon Campbell and added three children to the family, Tracy Lynn Devena, stepdaughter, Lovonne Jean Connelly and Lisa Marie Long, daughters.

George never knew a stranger, and anyone was welcome in his home for a cold one. He showed his love by teasing and joking, and he was a simple man to his family and friends and truly loved people and good times. His wish was, “May everyone enjoy life and good times as I did.”

A memorial has been established for the Hay Springs Ambulance Fund. Donations may be sent to Chamberlain Drabbels Mortuary, PO Box 443, Hay Springs, NE 69347.