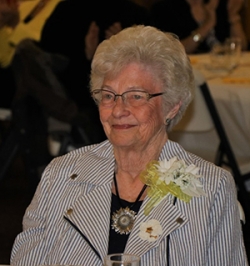 Donna Ann Mills, 86, of Gordon, passed away February 16, 2019, at her home on the Niobrara river with her family by her side.

She was born to the late Daniel and Ruth Walters, April 5, 1932, in Chadron, Nebraska.   Donna spent the majority of her life in Gordon, Nebraska, after moving to Gordon at the age of 4.  She attended and graduated as Salutatorian of her class from Gordon High School in 1950 and attended Chadron State College.

Donna married the late Gordon Mills, September 5, 1951, in Lincoln, Nebraska, and they were married for 64 years.  They lived in Lincoln and Fort Collins, Colorado before returning to Gordon in 1953. In 1957, Donna and Gordon moved their family to the ranch south of Gordon, where she remained until her death.

Donna worked as the bookkeeper and office manager for Nebraska Beef Packers and Stanko Farms for over 25 years. It’s been shared that she was always so helpful and pleasant, and that she never uttered a sharp word while working with the many individuals she came in contact with.

Music and faith were a big part of Donna’s life. Donna was a member of the Gordon United Methodist Church for 65 years.  In light of the important role of music in her life, Donna faithfully played piano and organ for the United Methodist Church for over 65 years, starting when she was a sophomore in high school.  Through the years, Donna has played for well over 500 events in the community.  She passed her appreciation of music on to her children and to the many young individuals that she gave piano lessons to. In addition to music and faith, Donna was an active PEO member for 61 years.  As a 4-H leader, Donna taught many young ladies how to cook and sew.  Donna enjoyed knitting, and gifted many a baby blanket to newborns.

Donna took great pride and joy in following and supporting her children, grandchildren and great-grandchildren’s activities and sporting events through the years.  She enjoyed supporting and following her local sport teams and was an avid Rockies fan. Donna took every opportunity to play bridge, and was known for her excellent bridge playing skills. Another of Donna’s favorite pastimes, besides watching QVC, was sitting on the deck on the east side of her home and enjoying the sounds and smells of the outdoors. Donna and Gordon spent many an hour on the road traveling to and from Boulder, Colo. to watch football games, and trips to visit the Albers in Estes Park, Colo. and in Arizona, and the many outings with their couples bridge group.

Donna was immensely proud of her family, and leaves behind nothing but beautiful memories.

Funeral services will be held Friday February 22, 2019, 2:00 p.m. at the United Methodist Church, Gordon, NE. Burial will be held in the Gordon Cemetery. A memorial has been established and donations may be sent in care of: Chamberlain-Pier Funeral Home, PO Box 366, Gordon, NE 69343.