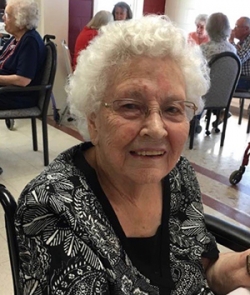 Over a century ago, a baby girl named Mary Ruth Freeman was born to Chris and Salina Susan Freeman in a small house near the Brazos River in Brazos County Texas. The year was 1917 and the date was October 22. She passed away on February 13, 2019, at her home in Gordon, Nebraska. She was 101 years, 3 months and 23 days old.

At the age of 3, Ruth moved with her family to north central Texas and then on to Crosbyton, a small town in the Texas panhandle. It was here she spent her adolescent and teenage years and graduated from Crosbyton High School in 1936.

Two years after high school she enrolled in Eastern New Mexico Junior College, and after a semester of school she moved to Las Cruses, New Mexico and began working for the Telephone Co. It was while living in Las Cruses she met and began dating Jimmie Wheeler. When World War II started, Jimmie joined the Navy and was immediately stationed in California. After a year of correspondence, Ruth moved to California, and Jimmie and Ruth were married on December 16, 1942. Ruth worked in various war related industries in California while Jimmie served his time in the Pacific.

In 1945, following the end of the war, Jimmie and Ruth moved to Gordon, Nebraska to join Jimmie’s older brother Forest in the electrical business. It was in Gordon that they chose to settle down, build a home and raise their children. Their first child, Myra, was born on February 12, 1946. Their second child, Kay, was born on January 16, 1948, and their fourth child, Harlen, was born on May 1, 1954.

After the loss of James, her 7-day-old third child, Ruth experienced a spiritual awakening that would direct her steps for the rest of her life. Around 1950, she became active in the Church of God and remained active for the next 67 years. She taught Sunday School, visited shut ins, transported the elderly to and from church and participated in endless prayer meetings.

In 1985, she lost her husband Jimmie and lived alone in Gordon until her oldest daughter Myra moved in with her in 1997. She spent her days reading her Bible and corresponding with her friends and family. Ruth always remembered her family on their birthdays, and loved visiting with people about her Lord. It was impossible for her to write a note, card or letter without adding a scripture or a prayer.

There was one characteristic, however, that set Ruth apart. She had the most wonderful laugh that when you heard it you couldn’t help but smile. Don Knotts and Tim Conway could trigger that laughter which usually brought tears to her eyes. Her laughter was like music to one’s ears and made you feel that all was well with the world.

She is preceded in death by her husband Jimmie and son James, her parents, and all of her siblings.

Services for Ruth were held on February 19, 2019, at the Gordon Church of God. Burial was held in the Gordon Cemetery. A memorial has been established and donations may be sent in care of Chamberlain-Pier Funeral Home, PO Box 366, Gordon, NE 69343.