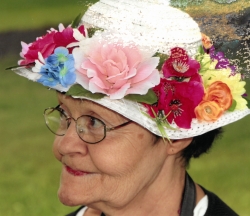 Carol May Petersen Brakeman passed away peacefully on February 8th, 2019, at her home on Downing Street in Denver, Colorado, 73 years old. She was born on August 11, 1945

in Gordon, Nebraska, just a few minutes after her twin sister Carmen Kay Petersen, daughters of Andrew Peter and Bernice Lea Hare Petersen. Carol grew up on the family cattle ranch in the Sandhills of Western Nebraska. Carol graduated from Gordon High School in 1963. She worked as a soda fountain girl at Stockman’s Drug and the telephone company as an operator. She married Maurice Lee Brakeman on July 25, 1964 in Gordon. Maurice served in the US Army, therefore, they lived in Nebraska, Virginia, Germany and Panama during their short marriage. They had a daughter, Traci Leigh and a son Marion Erik. Family was important to Carol and she celebrated her marriage anniversary for the rest of her life. Carol loved the color pink, iced coffee, Coke and playing bingo. Carol enjoyed many outings and adventures with her sister Carmen and with friends from her home at Denver North Care Center. She is survived by her sister, Carmen Kay Petersen, Wheat Ridge, Colorado; daughter, Traci Leigh Jones (David), Taylorsville, Utah; son, M. Erik Brakeman (Audrey), Catawba, South Carolina; 8 grandchildren and 9 great grandchildren. A memorial service will be held on Saturday, April 27th, 2019 at 10:00 a.m. at the Chamberlain Pier Funeral home in Gordon, Nebraska with interment afterwards in the Gordon Cemetery. A luncheon will be served at 12 noon for the family and friends, location TBD.