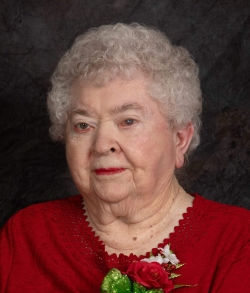 Mrs. Ruth Elaine Rothfuss , age 91, of Colby, Kansas, passed away on March 24, 2019 at the Prairie Senior Living Center. She was a former resident of Dewey, Oklahoma.

Ruth was born to James Frederick & Mary Elizabeth (Kearns) Sandoz on July 23, 1927 in Gordon, Nebraska. Her grandfather was Old Jules of Nebraska state fame for being the first settler in the Sandhills. She grew up on their ranch 30 miles south of Gordon. She attended the local one room schoolhouse through the eighth grade, then boarded in homes in Gordon during the week in order to complete high school. She then passed the teacher’s test and taught in the schoolhouse back in the sandhills near her childhood home.

Ruth was introduced to her Savior, Jesus Christ, through a youth camp she attended with a friend the summer she was 13, and served him all of her life whole-heartedly. When she and two of her friends left the sandhills of home to attend Miltonvale Wesleyan College in Kansas, she met and married Don Rothfuss. Don was a pastoral ministry major, and together in partnership they pastored several Wesleyan churches in Kansas, including the towns of Ames, Phillipsburg, Ottawa, Topeka, Manhattan. Later in life they served Wesleyan  churches in Fort Collins, CO and Atkinson, NE. Upon retirement they continued to serve with their pastor son at Sooner Park Wesleyan Church in Bartlesville, OK. She served as the breakfast coordinator and head greeter along with helping Don with following up with visitors to the church. Altogether they served God and the Wesleyan church for 54 years of ministry

Ruth was well-known for her great cooking and hospitality. Hardly a Sunday went by but what she and Don hosted guests for dinner. Her cinnamon rolls were legendary. She loved to garden, and had a room dedicated to her plants in her retirement home in Dewey, OK.

A memorial fund has been established to support World Hope; funds may be given through Arnold Moore Neekamp Funeral Home in Bartlesville, Oklahoma.

Memorial services for Ruth Rothfuss will be held at 1 pm Friday, April 5, at Sooner Park Wesleyan Church, 6200 Baylor Drive in Bartlesville. A private family burial will precede the memorial service.

Arrangements are under the direction of the Arnold Moore & Neekamp Funeral Home.  Online condolences may be left at www.honoringmemories.com.