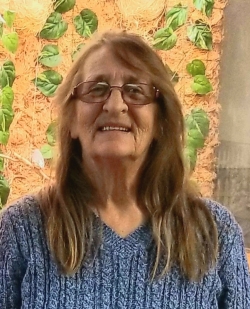 After a short battle with cancer, Frances Elaine (Dobry) Young, 64, passed away at her daughter’s home in Gordon, Nebraska, on Tuesday, April 23, 2019.

Frances was born in Alliance at St. Joseph’s Hospital on November 8, 1954 to Vaclav James Dobry and Rosemarie (Loch) Dobry. She was the fourth of five children. Frances attended high school in Alliance, Nebraska, and graduated in 1973.

While still in high school she met Lawrence “Speedy” Gonzalez and were married in 1972. This marriage brought forth two daughters, Nikki Rene and Sabrina Marie. The marriage was dissolved later, but they remained friends.

Frances worked at jobs around Alliance, including Dairy Queen, A&W, and Pollock’s Texaco. After her divorce she found a job on a ranch in Cherry County, McGinley Ranch. She and her two daughters moved to the ranch for a few years. During this time, she met her current husband and married in September 1991. After working at the ranch, the three moved into Gordon and she started working for the Gordon/Rushville Public School system as a cook at the elementary school. She continued her career in the school system at the high school in Gordon. She worked as a custodian the high school for 24 years, until retiring in 2013. Throughout her time at the high school she got to see a lot of students and children of the former students come and go. She was always trying to keep them out of trouble or be a listening ear. She also enjoyed working with the teachers at the school, she was always fixing things for them or doing what she could, so they didn’t have to wait for things to get done.

In her free time, Frances enjoyed being outside either planting flowers or just fixing things around the house. Her love for the outdoors started at a young age when she used to help her dad on the family ranch. She had many skills which were mostly self-taught, she could change oil in a vehicle to plumbing.

She was preceded in death by her parents James and Rosemarie Dobry, daughter Nikki Gonzalez, grandparents Paul and Chloe Loch, and uncle and aunt Harlan and Joann Loch.

Memorial services will be held Thursday, May 16, 2019 at 1:00 p.m. at the Gordon City Auditorium.  Pastor Russ Seger will officiate.  Inurnment will be in the Alliance Cemetery.

Memorials may be given in care of the family for a later designation to, Sabrina Gonzalez, 313 Maple Ave., Gordon, NE, 69343.

Online condolences may be left at www.batesgould.com.  Bates-Gould Funeral Home is in charge of the arrangements.