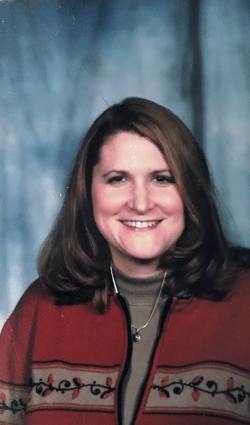 Graveside services for Angelica Bixby of Chadron, Nebraska will he held on Friday, July 5, 2019 at 2:00 PM at Pleasant Point Cemetery outside of Gordon, Nebraska.

Angel’s life began in Grand Island, Nebraska, on June 12, 1971.  At a young age, she moved with her family to the Sandhills near Ellsworth, Nebr, where her parents, Steven & Diane Beck, worked on the Mike Wilcox ranch.  Throughout her childhood, Angel became a cowgirl and horse lover as all young women do who are exposed to the equine beast.  When she became old enough, Angel started school at a nearby rural schoolhouse.

Eventually, Steven and Diane moved the family to the Dean Strasburger ranch in the Pleasant Point Community.  Pleasant Point Community Church easily became her church home.  Angel attended Golden Rule School in the country until she went to Gordon High School in Gordon, Nebr, as a freshman.  Next, Angel, her parents, and her brothers, Justin and Jason, moved to Anselmo, Nebr to work on the McGinn Ranch.

It was after this last move that Angel attended Anselmo-Merna High School where she excelled academically and where she participated in sports.  Her academic excellence led to her scholarship at Chadron State College.  After attending classes at CSC for two years, Angel married Jim Schmit.  In 1992, to this union their son, Dakota, was born.  Soon after they moved to the Bixby Ranch.

In 1996, a daughter, Sierra, was born to Angel and Lance Bixby.  The two married and became partners in many ranch activities.  Together they enjoyed camping, fishing, jet skiing, and the occasional tent blowing away in the wind which led to the purchase of their 5th wheel camper.

As Dakota and Sierra grew up, Angel became a leader of Girl Scouts, 4-H Club, and was the president of the Sheridan County 4-H Council.  She was also a teacher for AWANA Club at Pleasant Point Community Church.  While Angel greatly enjoyed volunteering her time to help with various youth organizations, her true love was working with cattle on the ranch, especially first calf heifers.  She spent her springs calving the first calf heifers mostly on her own.  Once in a while she would let someone help, but it was mostly her domain.  Angel also had chickens for many years and was called upon to judge 4-H chicken projects at the county fair.  She also loved to garden.  She took particular pride in her salsa that was made from her home grown tomatoes, peppers, and onions.  Angel also loved reading and had a great interest in studying her family history which led to her becoming a member of the Daughters of the American Revolution.

Despite Angel’s busy & fulfilling life, she battled a demon called alcoholism.  Her struggle with this disease peaked in 2017.  It was during this time that Angel chose to move to Chadron, Nebr.  Regardless of her efforts, Angel’s health deteriorated and she lost her fight to alcohol.  On June 24, 2019, Angel passed away at her home in Chadron.

A memorial has been established as the donor’s choice.  Donations may be sent to Chamberlain Chapel, PO Box 970, Chadron, NE  69337.

Graveside services for Angelica Bixby of Chadron, Nebraska will he held on Friday, July 5, 2019 at 2:00 PM at Pleasant Point Cemetery outside of Gordon, Nebraska.

A memorial has been established as the donor’s choice.  Donations may be sent to Chamberlain Chapel, PO Box 970, Chadron, NE  69337.