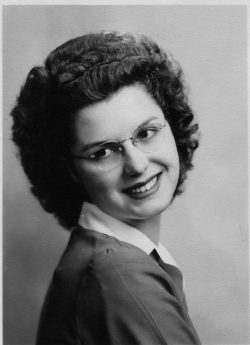 Clara Mae (Thietje) Bailey passed from this world to the next on July 3, 2019, in hospice care in Billings, Mont. after a brief illness. Her daughters were with her during her last week.

Mourning her passing are daughter Desiray Bailey, grandson John Fitzgibbons (Erin) and great-grandson Olin, and grandson Ryan Fitzgibbons, all of Washington state; daughter Deion Hagemeister (Michael), granddaughter Danae Anceso, and great-granddaughters Anastasia, Isabella, and Violetta, and grandson Timothy Hagemeister, all of Wyoming.  She is also survived by over 20 nieces and nephews.

Clara was born on the family farm near Hamill, S.D. on May 7, 1928.  Her parents were Nicolous Andrew Thietje and Johanna Helena (Bisping) Thietje. Clara graduated from Winner High School in 1947, and worked as a bookkeeper.  She was baptized in, and a member of the Congregational Church in Buffalo, S.D., and later a member of the Methodist Church in Gordon, Neb., as well as a Sunday school teacher.

In early 1947, Clara met her future husband at a dance, John A. “Jack” Bailey, son of Edward J. and Merle (Wheeler) Bailey of Lucas, S.D. Clara and Jack were married on Christmas Day, 1947, and from this union daughters Desiray Claire and Deion Jacqueline were born.  Jack and Clara celebrated their 70th anniversary December 25, 2017.

While Jack served in the Korean Conflict, Clara and Desiray stayed with family in S.D. and then moved to California to await Jack’s return. Upon his return, Clara, Jack, and daughters moved around S.D. while Jack worked nine years for his brother Jim in construction of dams and roads.

Clara and Jack then moved from S.D. to Gordon, Neb., in 1960, where they started Bailey Construction. Clara was bookkeeper for Bailey Construction for 26 years and for Bailey Storage center for 20 years. She volunteered at the Good Samaritan Center for 13 years and also at the Town Center, both in Gordon, Neb.  She took residents on shopping trips, read, wrote letters, and held Current Events and History sessions. Clara was Volunteer of the Year in Gordon in 1983, 1984, and 1985.  Later she and Jack volunteered for over 10 years for R.S.V.P. (Retired Seniors Volunteer Program).  In 1997, Clara received the First Lady’s Award for Outstanding Community Service in Nebraska from Diane Nelson, First Lady of Nebraska.

Clara and Jack enjoyed square dancing for many years and later also enjoyed senior dances with their friends in the Gordon area. After retirement, Clara realized a dream come true as she and Jack bred, raised, and trained two colts for both riding and driving buggies.  They rebuilt an old barn for their horses, and restored old buggies and wagons for use and resale. Clara and Jack participated in parades from Crawford to Valentine, NE with their costumed horses, using their covered wagon, buggies, and buckboard for 20 years. Brides and grooms were driven to their weddings in style, and funerals were more symbolic with horses and buckboard draped in black.

In 1994, Clara and Jack received the Gordon, Neb., Family of the Year Award for these many activities.  It was an honor they always cherished because Gordon was home for 50 years, and filled with friends.

Clara had a warm and generous spirit, enjoyed socializing with family and friends, had a great wit and sense of humor, and harmonized beautifully with Jack, both in song and life.  She will be greatly missed, and never forgotten.

A Celebration of Life service will be held jointly for Clara and Jack on August 19, 2019 at 10 am at the Mason Funeral Home in Winner, S.D.  Following interment at Winner City Cemetery, a luncheon will be served at the Winner American Legion. In lieu of flowers, please consider a donation in their memories to the charity of your choice.