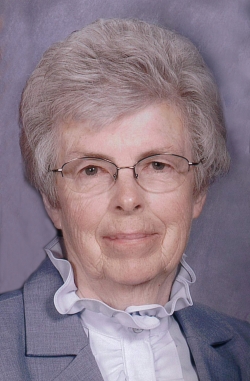 Brockhaus Funeral Home in Verdigre, Nebraska is in charge of arrangements.

Norma Jean (Larsen) Holzberger, daughter of George and Myrtle (Blankenfeld) Larsen, was born May 28, 1935, at Niobrara, Nebraska. As a young girl, Norma helped on the family farm and showed cattle in 4-H. She graduated from Verdigre High School in 1953 and later from Teacher’s College in Wayne, Nebraska. Norma taught at Sparta Country School, Niobrara Public School, and Gordon Public School.

On March 5, 1971, Norma was united in marriage to Elmer Holzberger at the Lutheran Church in Niobrara. She was a member of Grace Lutheran Church in Gordon and the Let’s Play Card Club. She enjoyed working in her vegetable and flower gardens, reading newspapers, traveling with her husband, and enjoying her pets.

In lieu of flowers, a memorial has been established with the Gordon Rushville School Foundation. Donations may be sent to P.O. Box 530 Gordon, NE 69343.