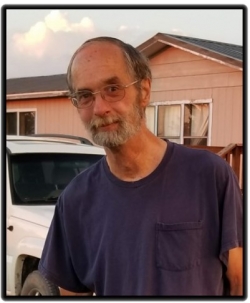 Kenneth, also known as Ken or Kenny was born October 29, 1958. At the age of three he was adopted by Robert and Hazel Reutter along with his brother Keith, they joined a sister, Kristine in Crawford, NE where they lived until 1964. At that time the family moved to Gordon, NE where Ken graduated from Gordon High School in 1977.

After graduation Ken attended trade school in Milford, NE. In May of 1980 he married Nancy Burleigh.

Ken had helped with the police department in Gordon which prompted him to attend the police academy and then became Chief of Police in Crawford, NE. While in Crawford they became parents to Daniel who was born May 11, 1987. They returned to Gordon and then moved to Mitchell, NE in the 90’s, in 2000 he moved to Lyman where he was the Chief of Police. During that time, he took special classes to train German Shepherds for police work. He put that training to work while in Lyman.

He met Lorri Bell while in Lyman. They were married June of 2010.  He returned to Gordon in 2014 where he lived until his death. His love for animals continued throughout his life, he left behind his beloved German Shepherd, Tiki and cat, Sissy.

He was preceded in death by his mother Hazel Reutter, brother-in-law John Brice and nephew Brian Brice.

He is survived by his father Robert Reutter of Gordon, NE son Daniel (Madysen) of Lincoln and grandson Silas Reutter, sister Kristine Brice of Gordon, brother Keith (Wanda) of Bradenton, FL, nieces Melissa Brice of New York and Kristen Blanton of Florida and numerous other relatives.

A memorial has been established for The Sheridan County Sherriff Department and donations may be sent in care of Chamberlain-Pier Funeral Home, PO Box 366 Gordon, NE 69343.

Services will be held August 6, 2019 at 10am at Grace Lutheran Church with burial in the Gordon Cemetery.