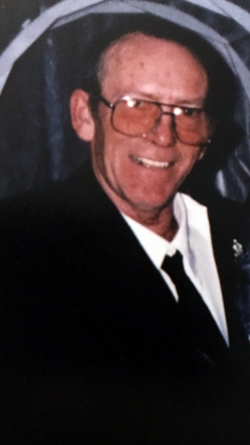 Ed was born at home to Homer Henry and Frances Bernadine (Donner) Pascoe on February 4, 1943. He was the 5th child of 11. They lived on a farm north of Wall, South Dakota, where Ed grew up. Being the eldest boy, Ed ran the farm during the times his dad traveled to California for harvest. He attended country school where his mother taught and then earned his GED due to being needed at home to run the farm when his father became ill.

Ed enlisted in the South Dakota Army National Guard in 1964. Upon returning to Wall, he became engaged to Ladonna Hinman. They married on July 17, 1965, and moved to North Platte, where Ed worked at Nebraska Machinery (Caterpillar) and Ladonna babysat. About a year after they were married, Ladonna purchased a ‘59 Oldsmobile stock racecar with money she had earned waitressing. Ed soon found much success racing, so much so that he was able to pay their house payment with his winnings and fill that house with trophies. Ladonna also drove the stock car in powder puff races every chance she got.

Eleven years into their marriage, thinking they may never be able to have children of their own, Ed and Ladonna were blessed with Paula followed by Paul, Doug, Patricia, Timothy, and Scott.

In 1983, after 19 years at Nebraska Machinery, Ed decided to buy into Fred’s Repair, an auto parts and repair business owned by his brother-in-law, and moved his family from North Platte to Merriman. Years later, he worked as a machinist for Moursund Cattle Company before starting his own business, Merriman Welding & Repair.

Ed was a pillar of his community and “could fix anything.” He was a member of Knights of Columbus. His passions included cars and his grandchildren. He was also a lifetime member of the NRA and enjoyed shooting guns.

Ed was preceded in death by his parents, sister Hazel, brother Bob, various brothers-in-law and sisters-in-law, nieces and nephews.

A memorial has been established for Festival of Hope in Scottsbluff or Circle of Life in Chadron.