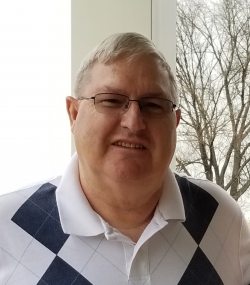 Funeral services for Melvin Charles Krotz, 66, were held at 3:30 p.m. Friday, September 6, 2019, at St Joseph Children’s Home Chapelwith The Reverends Bill Baker and Diane Carlton officiating. Burial took place Saturday, September 7, 2019, at the Holly Cemetery in Rushville, Nebraska, at 11 a.m. Melvin passed away at University of Colorado Hospital in Aurora, Colorado, on Friday August 30, 2019. In lieu of flowers, memorials may be given to either All Saints Episcopal Church, Lion’s Club or the Bent Barrels and Crooked Arrows 4-H Club. The casket was open prior to the service at St Joseph’s. Arrangements are by the Colyer Funeral Home and condolences may be sent to www.colyerfuneralhome.com.

Melvin was born on August 26, 1953, to Charles and Barbara (Landreth) Krotz in Rushville, Nebraska. He graduated from Rushville High School in 1971. He moved to Chadron, Nebraska, and learned the trade of carpet installation. Melvin met his wife, Paula (Miglia) Krotz in January of 1990 at a square dance held in his old country school house. They were married eight months later on September 1, 1990. They began their married life in an old, rented trailer house in Rushville. A year later, they moved to Torrington, Wyoming. Scott Charles Krotz was born to their union on August 31, 1993. Hayley Rae Krotz joined their family in January of 2011. Melvin worked a variety of jobs while living in Torrington. His first job was at the Christmas Tree Farm. From there, he moved to Kelley Bean. He then decided to put his training as a carpet layer to good use and had his own business, Krotz Karpeting, for a couple of years until he suffered a back injury. He then moved on to the Oak Tree Inn in Morrill, Nebraska. His final work experience was at Century Lumber in Torrington. He retired from that position in October of 2017. Melvin joined the National Guard shortly after high school and became part of the Chadron artillery unit. When he moved to Torrington, he joined the Torrington National Guard Unit and learned the MOS of canvas repair specialist. He retired from the National Guard after almost twenty-four years of service.

Melvin thoroughly enjoyed people. He was happiest when he was giving someone a bad time. He always seemed to have a smile on his face and was a very laid back person. He seemed to know almost everyone due to his variety of work experiences. No one was a stranger. He was a member of the All Saints Episcopal Church. He also belonged to the Torrington Lion’s Club, the American Legion and the Bent Barrels and Crooked Arrows 4-H Club.