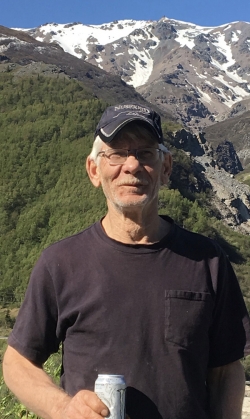 Thomas Malmberg died September 4, 2019, in Amberg, Germany. Tom, known as Joe to his older siblings, is survived by Charlie, Jack, June, Nancy and Sally. A reputation for being ‘ornery’, Joe would lock himself in the pickup to postpone attending country school. School for him was what had to be endured before he could practice his ice skating skills with his sister, Sally. At one time or another he worked as a ranch hand with his dad, Emil, and each of his brothers in the Sandhills and Chadron and team roped with Jack. Joe graduated from Gordon High School as a champion wrestler in 1967, and was drafted into the military in 1968.

Upon completing his military duty in an Army airborne unit with the rank of sergeant, Tom headed to Australia by way of Kodiak, Alaska, in 1971. His bride of 46 years, Grace, met him in the middle of America and after chasing him coast to coast for seven years caught him with his back to the sea, and they were married. Grace referred to her Tom as the ‘ocean going cowboy’ as he stubbornly avoided giving up his Stetson for a ball cap.

Known for his great ingenuity and self reliance, he built and moved giant structures without heavy machinery or formal training. Tom built a house from scrap lumber in Kupreanoff Straits, winched it onto a raft of his own creation and towed it to its final location in Pile Bay. In the wilds of Kodiak Island, he and Grace reared six successful children (three of whom he delivered). The saddest day of his life was losing his homestead in a land dispute.

Tom is survived by his wife, Grace, and six children; Mieke, Tatiana, Annika, Adriana, Ayesha and Cort. Memories of their father will be marked by wild skiff rides looking at phosphorescent blooms, time spent admiring the beauty of the northern lights and constellations, ice skating, paddling the bay, wood finding excursions, hunting trips and the art of firewood stacking. He returned from commercial fishing trips with giant hermit crabs for his kids to treat as pets and styrofoam blocks for them to turn into makeshift boats.

Tom worked as a Port Engineer at Port Bailey cannery, an engineer on a salmon tender, and a deckhand on commercial fishing boats to support his family. After 33 years, Tom left Kodiak in 2004 for a college degree in HVAC, graduating with a 3.7 GPA. He spent the last 12 years of his life as an excellent mechanic, fixing military land vehicles and traveling the USA and Germany for work. Tom’s recent work family remembers him as OMT (Old Man Tom)– a dependable, hardworking mechanic who was fun to travel and spend time with; always up for an adventure and happy to help anyone in need.

Tom’s passing is met with extreme sadness and loss; yet with an appreciation for the humble, funny, fearless and loving man he was; a man who was awed by every sunset he ever saw; eager to try new foods and curious about all people and cultures . He will especially be remembered, by anyone he ever spoke to, for the great pride he took in his children and his love for Alaska.

No matter how old they get, Tom’s children will miss their Pops. He was their hero and protector; a consummate explorer with boundless energy and wit, but they know that he is off on his next adventure – A Raven living on whatever land he wishes and an Emperor penguin in Antarctica… Why choose if you can split your dust in more than one place?