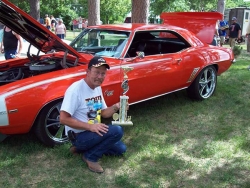 Scott Jefferson Kernick was born May 18, 1957, in Atkinson, Nebraska, to Ray and Marcy Kernick. He passed away on September 17, 2019, at his home in Gordon, Nebraska.

He attended school in Atkinson and graduated from West Holt High School. He attended Northeast Community College in Norfolk and Kearney State College.

He was baptized and attended St. John’s Lutheran Church in Atkinson. He had two brothers, Brian of Gordon and Brad of Kearney. He was married to Debbie Shedeed on June 19, 1993, in the park in Gordon. To that union a daughter, Shay, was born.

From an early age, Scott really enjoyed cars and car activities. He enjoyed stock car races, drag races, burnout contests, and lots of car shows. He was even able to attend the huge SEMA convention in Las Vegas last Halloween before he got sick. His 1969 Camaro SS was his pride and joy.

He will always be remembered as a very happy and kind guy. He loved his family and his friends. He will be missed by many.

He is survived by his wife Debbie of Gordon, and daughter Shay of Kearney. He is also survived by his brother Brad and nephew Travis of Kearney and niece Cassie of Omaha, his sisters-in-law and families; Noreen (Eric) Anderson of Gordon and Shawn and Jason, Sharon (Steve) Judd of Rapid City and Melanie Bourne, Robin Retzlaff and Nichole Younkin, Marcia (Joe) Vinton of Cortland, Neb., and Tim, Andy, Erin Davidson and Kayla Davidson, and Glenda (Mike) Davis of Lincoln, Neb., and Angela Mora, Christy Hodges, Danny Davis, Jennifer Suehl and Stephanie Davis.

Memorial services were held Monday, September 23, 2019, at 2:00 p.m. at the Gordon American Legion. Inurnment was in the Gordon Cemetery. A memorial has been established for the 2020 Harvest Festival Car Show or to C.A.R.E. and donations may be sent in care of Chamberlain-Pier Funeral Home, PO Box 366, Gordon, NE 69343.