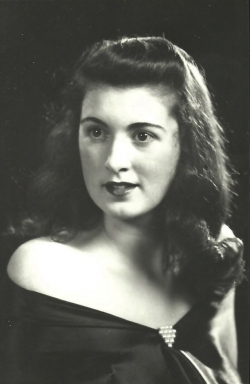 Marjorie Helen (McCann) Anderson was born June 28, 1925, in Dubuque, Iowa. She was the eldest of three children born to Hal and Marjorie McCann. A few years later the family settled in Des Moines, Iowa, where “Dolly,” as she was known to family and friends, lived a charmed childhood, biking, skating, sledding, swimming, riding the streetcar to dances, and downtown to the movie theatres. After graduating from Urbandale High School, she worked at Banker’s Life Insurance Company for a year prior to attending the University of Iowa.

It was during her time there that she met Everett (Andy) Anderson, who had just returned from service in WWII and had begun studying law at U of I. They were married June 1, 1947, and spent the early years of their marriage in Iowa before moving to Lincoln, Neb. After eight years in Lincoln, Marj and Andy moved to the Sandhills community of Gordon, Neb., in 1960 along with their four sons: Steven, Michael, Paul, and Erik. It was during this period of her life that Marj’s longtime interest of photography blossomed. Although self-taught, she became an accomplished photographer. This passion led her to many adventures photographing rodeos, cattle drives, brandings, hay crews, and track meets. Of special interest to her were the Lakota people living in and around the area. She formed a relationship that allowed her to be welcome at Pow-Wows and the Sun Dance, and was made a member of the tribe and given the name Kindhearted Woman by Chief Frank Fools Crow. She was a wonderful mother who ingrained in her boys a sense of adventure and freedom. Many were the trips to the Niobrara river, the Pine Ridge area, the Black Hills, Sandhills, and Toadstool Park for camping, hiking, and just general fun.

In 1970, Marj moved to the Scottsbluff ara. There she met Robert Nerud and spent nearly twenty years with him on his farm near Mitchell, Neb., during which time she formed a special connection with his three sons: Robin, Scott, and Greg. Also, during this period, Marj volunteered at the thrift store in Scottsbluff. She had a keen eye for nice jewelry (turquoise in particular), linens, silk scarves, and antiques. She had a unique style that was all her own.

In 1995 Marj bought a home in Hemingford, Neb., which she owned for the next eighteen years. From 1979 forward, she became a grandmother to twelve grandchildren. As with her boys, Marj enjoyed playing and spending time with her grandkids, entertaining them with her stories, photographing them and passing to them a wonderful and unique perspective on life.

For the past eight years Maj has lived with her son Steve at his home near the Niobrara River in southern Dawes County. She was blessed to have her health for 94 long years and the good fortune to pass peacefully in her sleep at home on September 12, 2019.

She was preceded in death by her son Paul, sister Louise, husband Andy and close friend Bob Nerud. Left to celebrate her life is her brother David, her sons Steve and his children Aaron Reyes, Nick, Ole, and Britt; Mike, wife Jody and their children Austin, Valorie and Erika; Paul’s daughters Megan, Ingred, Brooke and Holly; and Erik, wife Julie and their daughter Ursula; as well as nine great-grandchildren (soon to be ten).