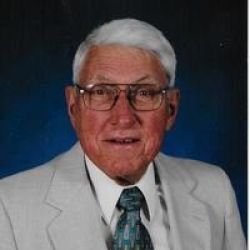 Visitation was Sunday, October 6, 2019, at Biglin’s Mortuary in O’Neill.

Gil passed away Wednesday, October 2, 2019, at the Parkside Manor in Stuart, Neb.

Memorials may be directed to the Gil Poese Recreation Area for future improvements.

Gil was born December 1, 1925, in Emma, Missouri, to Norbert and Nora (Klostermann) Poese.  He received his education in Waverly, Missouri, and graduated from Waverly High School in 1944.  In May of 1944 he was drafted in the Army, where he trained and worked as a medic.  After basic training he was sent to Europe where he served in WWII until June 19, 1946.  After discharge he attended Pathfinder School of Radio in Kansas City, MO, and received his diploma in 1949.  His broadcasting career was interrupted when he was recalled back into active service for the Korean War in 1950, where he served until August 1951.

Gil married Welma (Pat) Mathis in 1948.  They were blessed with five daughters and one son. After many years of marriage, they divorced.  Gil’s broadcasting career took him and his family to LaPorte, Indiana, St. Joseph, Missouri, Maryville, Missouri, and Holdrege, and Gordon, Nebraska.  In 1959, Gil became the owner of KBRX Radio and moved his family to O’Neill, where he still resided at the time of his passing.

Gil was a member of the First Presbyterian Church in O’Neill, O’Neill Rotary Club, Eagles Club, O’Neill American Legion Simonson Post 93, Gideons and O’Neill Area Chamber of Commerce.  Gil served on the O’Neill Public School Board for 23 years.  In his younger years he enjoyed fishing, hunting golf, and playing guitar.  He shared his love for music by playing in a band that he and his friends formed called the “Tennessee Trio”.  They even went on to make a recording of their songs.  However, his primary interest and passion in life was always radio.

During his career in broadcasting, Gil was honored with several awards including the Nebraska Broadcasters Hall of Fame, University of Nebraska College of Journalism and Mass Communications Hall of Fame, Outstanding Older Worker in the State of Nebraska, and the O’Neill Hall of Fame.