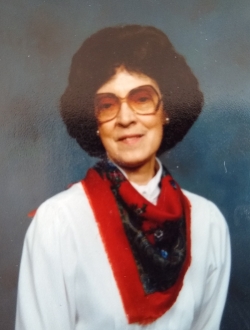 Donna May (Mueksch) Berry was born on May 3, 1929, in Hay Springs, Nebraska. The second child of Herman and Montez (Nonnamaker) Mueksch, she grew up with her parents and brother, Sterling, on the family farm south of Hay Springs. Donna and her family attended a small country church called New Hope. It was there that Donna accepted Christ as her Savior and knew that she wanted to live a Christian life to honor Him. Donna went to Sandridge Country School through eighth grade, then advancing to Hay Springs High School, where she graduated in 1946.

Donna had always wanted to be a nurse. In 1947 she entered nurses’ training at Nebraska Methodist School of Nursing in Omaha, Nebraska. It was there that she received her RN degree in 1950. Her kind and compassionate nature made nursing an excellent career choice for her, and she won the affection of many a patient with her caring demeanor.

To further her knowledge of the Bible, she then entered Northwestern Bible College (now known as Northwestern University - St. Paul) in Minneapolis, Minnesota. It was there that Donna majored in Missions and met her future husband Harold Berry. The two were married on June 5, 1954. Donna received her Bachelors degree in Missions in 1956.

In 1956, Donna moved with her husband to Dallas, Texas, where she worked at Scottish Rite Crippled Children’s Hospital in orthopedic surgery until the birth of her first child, Stephen, in 1959.

Donna and Harold then moved to Lincoln, Nebraska, in 1960, where their second child, Deborah, was born. Donna began working at Lincoln Christian School as the school secretary in 1966 where she served for 10 years, managing the early organization of the school and interacting with the young students as they came to the office window for various needs and requests. She was a valuable asset to the staff in the early days of Lincoln Christian School, and was recognized for her service by receiving the Secretary of the Day award from radio station KFOR, and also the Lincoln Christian School yearbook dedication in 1975.

After a move to Omaha in 1978, Donna worked as secretary at Evangelical Bible Church. This position was then followed by her employment at Grace University in the Snack Shop where she made many friends and enjoyed serving the students in her 14 years of service there, creating a fun and accepting environment for the students and their spouses.

2002 brought a move to Alamo, Texas, where she and Harold lived in the Rio Grande community of Bibleville, ministering at the Bit-O-Heaven Church in Donna, Texas, for 10 years. She then lived in Holdrege, Nebraska, until she returned to Lincoln in 2018.

Lincoln is where she spent her final days with her husband Harold until the day she was called home to be with her Lord on October 13, 2019.

Donna was preceded in death by her father, Herman Mueksch, and mother, Montez Mueksch, a brother, Sterling Mueksch, and a niece, Doris Mueksch.