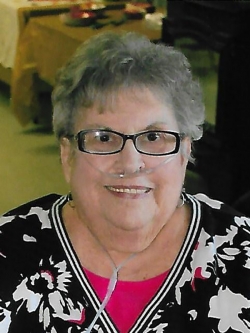 Bonnie Jean Elwood passed away from complications due to pneumonia on Saturday, Dec. 14, 2019.

Bonnie was born in Rushville on Oct. 6, 1929, the daughter of Kathryn and Lloyd Tiensvold. She was raised in Rushville and was a graduate of Rushville High School. She married Norman Lyle Elwood Dec. 19, 1949.

They eventually settled in Rushville, living north of town in a big white house where countless memories were made. They raised seven children in that home, including Susan, Steven, Sheryl, Soni, Shelli, Sindy and Scott.

Later in life, the couple moved to a smaller home in Rushville, where Bonnie stayed for several years after Lyle passed away in 2011. Bonnie moved to Pioneer Manor Nursing Home in Hay Springs in the summer of 2018, where she lived until she went to meet Lyle in Heaven.

Bonnie was a stay-at-home mother for much of her life, always busy with the many activities of her children. Later in life, she enjoyed working in Gordon at Hinn’s Clothing Center-and she never had a shortage of clothes in her closet, and always prided herself as a well-dressed lady.

Bonnie always had a smile on her face, and had kind words for everyone. She loved her family dearly, and was her happiest when she was able to spend time with them. She loved big family gatherings, and enjoyed hosting holiday events throughout her life.

Bonnie was an active member of Immaculate Conception Catholic Church in Rushville for many years. She had a strong faith, and rarely missed church until poor health made it difficult for her to go in her later years. Even when traveling, she made sure to find a church to attend either Saturday night or Sunday morning Mass. Bonnie enjoyed crocheting, and made countless afghans that she shared with loved ones as gifts for many occasions. She also loved to play bridge, and played on a regular basis for many, many years with her dear friends.

A memorial has been established for Immaculate Conception Catholic Church or Pioneer Manor Nursing Home and donations may be sent in care of Chamberlain-Pier Funeral Home, PO Box 366, Gordon, NE 69343.