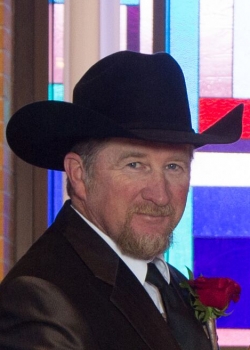 On Sunday, January 12, 2020, Mike Welker, passed away at the age of 60 at his home south of Kilgore, Nebraska. Mike was born on September 12, 1959, in Valentine, Nebraska, to Dean and Eldine (Rauer) Welker. He attended Cody-Kilgore Unified Schools and graduated in 1977. Following high school, Mike attended Mitchell Vo-Tech and graduated in 1979 with a Welding Degree.

In 1980, he and his high school sweetheart Susan (Kockrow) Welker were married in Valentine, Nebraska. From this union, they had three daughters—Lynn, Marla, and Lisa. Together, with his dad, Dean Welker, they created and built Welker Welding, a manufacturing company established to meet the needs of the ranching industry throughout the Midwest. In 1989, Mike and Susan had the opportunity to buy a ranch south of Kilgore. Having a deep appreciation for the Sandhills and a passion for agriculture, Mike enjoyed raising cattle, growing crops, and watching the resident wildlife visitors.

Mike had rodeo in his blood. As a youth, he loved riding bulls and bareback horses. Later in life, he spent 17 years as a rodeo judge, notably serving for several years in a row as a rough stock and timed events judge for the National Little Britches Rodeo Finals. He also judged the South Dakota State High School Rodeo Finals in 2007. In addition to his passion for the sport of rodeo, he was an extremely talented leather crafter and the proud owner of Welker Leather. Two bronc halters crafted by Mike were worn by famed horses at the Indian National Finals Rodeo and are proudly displayed in the South Point Hall of Fame in Las Vegas, Nevada.

Mike’s friends and family would describe him as a person who would always greet you with a smile, someone who could make you laugh with his quick wit, and a man of his word—honesty was the best policy. He loved his wife, Susan, and their life together south of Kilgore where they ranch and raised their daughters. At the time of his death, they were married for 39 ½ wonderful years. Mike was the best husband and dad, having made his family his priority his whole life.

Mike was preceded in death by his mother, Eldine; grandson, Riley; and paternal and maternal grandparents.

Memorial services were held on Saturday, January 18, 2020, at 2 p.m. CT in Valentine, Neb., at the Valentine Presbyterian Church with Pastor Scott McClellen officiating followed by burial at the Kilgore Cemetery.

Memorial contributions may be made in Mike’s name to be designated at a later date.

Sandoz Chapel of the Pines in Valentine assisted the family with arrangements.