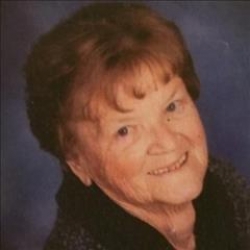 Ilo was born in Rushville, Neb., on May 22, 1930, to Leo and Elma (Croxen) Jansen. They lived in a sod house in Interior, S.D., until 1935 when her mother passed away, and the family moved to Scottsbluff, Neb., where she and her sisters attended school. When her father remarried, two sisters were added to the family. The six sisters remained close throughout their lives and held an annual Sisters Day.

She graduated from Scottsbluff High School in 1948. In 1949, the University of Nebraska gave out free tickets for their football games to college students throughout the state. She attended the game with some friends, and after attending her 1st game, she became an avid fan. She attended Chadron State College and became a teacher, and started her teaching career in Sheridan County Schools and taught from 1950-1953.

February 22, 1953, she married the love of her life, John H. Fegler, in Scottsbluff, Neb. They made their home outside of Mitchell, Neb., in the Sunflower community, where they farmed and were blessed with five children: Jim, Jerry, John Jr., Jack, and Judy. Ilo was very involved with her children’s activities, making costumes, teaching Sunday School, high school sports, den mother for Cub Scouts, or helping out with school projects. She was a great cook, and there are many fond memories of coming home to noodles hanging up to dry on noodle day or rushing home after school for fresh donuts.

In 1967, John passed away, and the family moved to Chadron as Ilo went back to school. They moved to Hay Springs in 1970, where she taught in a one-room schoolhouse on the Mirage Flats. The family moved to Ogallala in 1972, where she taught at District 7, Roscoe, Keystone, and few other country schools. Her last school was in Ellsworth until her retirement in 1993. She was often a substitute teacher for Ogallala, Big Springs, and Paxton schools until 2013.

You could always find Ilo outside working in her yard, with her flowers, and decorating. She loved telling people how well her flowers did at the fair and receiving Yard of the Week from the Chamber. She tried to attend every event of her nearby grandchildren and great-grandchildren. Weekly drives to Harrisburg to watch Jason in football, basketball, and track. Watching Ashley, Lea, and Olivia play t-ball, school plays, and concerts. She loved to teach her grandchildren how to cook, make noodles, and crafts like May Day Baskets. She loved swimming throughout her life, and often took her children and grandchildren to the local pool. Ilo attended many Husker football games with her family and with her sister Della. If she wasn’t at the game, she was listening to them and was known to lock her door or take the phone off the hook so she wouldn’t be bothered during her Huskers games.

She was often volunteering at Mansion on the Hill, The Howdy Booth, Meals on Wheels, open class flower division during the fair, and many others. She was a member of the Ladies VFW, American Legion, Does, and attended St. Paul’s Lutheran Church.

A memorial has been established in her memory for later designation. Condolences may be shared at prairiehillsfuneralhome.com.

Services will be held on January 25, 2020, at 10:30 a.m. at St. Paul’s Lutheran Church in Ogallala with Pastor John Stubenrouch officiating.  You are encouraged to wear Nebraska Husker attire to the service, as that is what Ilo loved. Interment of Cremains will be in the Scottsbluff Fairview Cemetery at a later date.

Prairie Hills Funeral Home of Ogallala is in charge of arrangements.