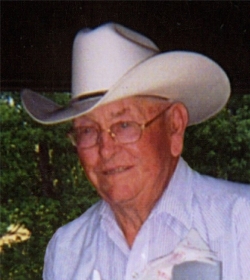 With deepest sorrow we announce that Kenneth L. Hooper, age 97, passed away peacefully surrounded by his loving family on Sunday, January 26, 2020, at Western Nebraska Veterans Home in Scottsbluff, where he had resided for the last four years.

Ken was born July 6, 1922, in Brownlee, Nebraska, to Nuck and Sylvia (Hankins) Hooper.  He spent the early part of his childhood on the Boiling Springs Ranch near Cody, Nebraska, and had many fond memories of his time growing up there.  During the hard years of the Depression, the family moved to Gordon, and eventually to the Half Diamond E Metzger Ranch north of Hyannis.  There Ken broke horses and worked as a ranch hand until enlisting in the United States Army during World War II.  During the war, he attained the rank of Sergeant while serving as Telecommunications Specialist in the European Theatre.  After being honorably discharged from the Army, Ken returned home and was employed by Northwestern Bell Telephone Company in Alliance, Nebraska, and later Rapid City, South Dakota.

Ken married Dorothy Nelson on June 11, 1947, and with Ken’s love for ranching, he quit the phone company and they spent the next 15 years working on the Marvin Metzger Ranch north of Gordon.  In the spring of 1966, Ken and Dorothy leased, and eventually purchased, a ranch from Ken’s uncle Warren Hooper in south Sheridan County, where they spent the next fifty years building a successful cattle operation from next to nothing.  To this union were born two daughters, Sandra and Connie.

Ken was kind, humble, honest and hard working.  He enjoyed working cattle and taking care of the ranch.  He had a gentle way with animals, especially horses, and was the definition of a true steward of God’s great resources.  He was a great man who loved to kid around.  One of his great joys in life was being grandpa to his six grandchildren and seven great-grandchildren.

Funeral services will be held at Chamberlain-Pier Funeral Home in Gordon on Saturday, February 1, 2020, at 10:30 a.m. with Pastor Roy Monahan of the Church of the Sandhills in Hyannis officiating.  Burial with Military Honors will follow at the Gordon Cemetery. A memorial has been established for the Hemingford Rural Fire Department and donations may be sent in care of Chamberlain-Pier Funeral Home, PO Box 366, Gordon, NE 69343.