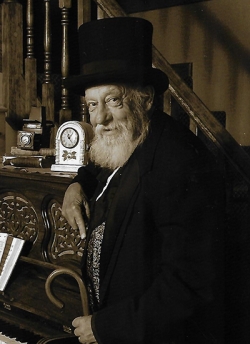 William Richard Van Kerrebrook, 75, of Pierre, S.D., formerly of Gordon, Neb., died Sunday, February 2, 2020, at Avera McKennan Hospital in Sioux Falls, S.D. He was born March 31, 1944, in Gordon, Neb., to Oscar and Mary Ann Van Kerrebrook. He attended the Catholic School in Rushville and graduated from Rushville High School in the Class of 1962. After graduation, he attended Rapid City School of Business for two years and then returned to the business office at the Rushville Sale Barn. After serving in the US Army from 1965 to 1967, one year of which was in Vietnam, Bill moved to the “Big City”, Washington, D.C., to work with an accounting and tax office and the Center for Applied Linguistics. He later joined Nichols Realty as Property Manager and Real Estate Agent.

Bill married Barbara R. Berkel on April 24, 1971. Following their marriage, they purchased and restored an 1898 brownstone townhouse in the Dupont Circle area of D.C. They became parents in 1978 when their daughter Rachel was born, followed by Leah in 1981.

In 1989, the family moved from D.C. back to Gordon and lived north of Clinton close to his parents. After Oscar and Mary Ann moved to town, Bill and his family then lived on the family ranch from 1998 to 2016. During this time, Bill was employed by Sheridan County Implement and Carol Childs Tax Office. Bill and Barb then moved to Pierre, S.D., for medical reasons and to be close to Rachel and her family. Bill was a member of the Pierre Street Masters Car Club. He enjoyed joining the Club members for car shows, poker runs and drives. He also was a train aficionado, designing and constructing a train layout with his grandson Blake.

Bill was a loving family man always “over indulging” his wife, daughters, sons-in-law, grandchildren, and pets. He greatly enjoyed traveling by car and train (no airplanes please), could fix about anything and had a memory like an elephant. He was dearly loved and will be greatly missed.

He was preceded in death by twin infant sons, who died at birth; his parents Oscar and Mary Ann; four infant siblings who died at birth, grandparents Rene and Alice Van Kerrebrook and William and Josephine Arthur, father-in-law Robert Berkel, numerous uncles, aunts, several cousins and a niece.